Update Required To play the media you will need to either update your browser to a recent version or update your Flash plugin.
By Jerilyn Watson, Caty Weaver and June Simms
2010-11-22 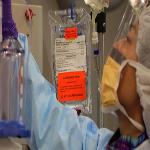 Chemotherapy medicine is prepared for a liver cancer patient at the National Institutes of Health in Bethesda, Maryland

BOB DOUGHTY: And I'm Bob Doughty. Today, we will tell about a new cancer treatment and a study of the disease malaria. We will tell about the possibility of drier conditions in many populated areas. And we explain how cutting down on wasted food could lead to energy savings.

FAITH LAPIDUS: Doctors at the Mayo Clinic are using a process known as MRI-guided laser ablation to fight kidney and liver tumors. They are said to be among the first American doctors to use the process against the cancers.

Until now, doctors in the United States have used laser ablation mainly to treat tumors of the brain, spine and prostate.

Liver cancer is one of the most common cancers in the world. It is also the third leading cause of cancer death worldwide. Many liver cancer patients are too sick to survive traditional treatments, like chemotherapy and radiation. Even if they could, medical experts say these treatments only provide a small increase in life expectancy.

BOB DOUGHTY: Eric Walser is an interventional radiologist with the Mayo Clinic in Florida. He was one of the first radiologists to use the MRI-guided laser ablation procedure to treat kidney and liver tumors. He says the process makes it possible for doctors to target and destroy tumors without damaging the rest of the organ.

Patients are placed inside an MRI machine. They are given a drug to keep them from moving during the procedure. A special needle is inserted directly into the tumor and light energy is passed through a laser.

The MRI machine can measure the temperature inside the tumor. Doctors are able to watch a monitor showing the temperature rising. When the tumor is heated to the point of destruction, the laser is turned off. The whole process lasts about two and a half minutes.

FAITH LAPIDUS: Doctor Walser first used the MRI-guided laser procedure in June. The Mayo Clinic reported that he had successfully treated five patients by the middle of October.

Earlier this year, doctors at the Mayo Clinic in Minnesota used MRI-guided laser ablation to remove tumors of the prostate. Doctor David Woodrum has successfully treated seven prostate patients with the procedure. He says it provides for a less invasive and less traumatic experience.

The process is still being developed, but doctors say it could prove to be successful for treating most cancers in the body. The doctors say it should only be used on tumors that are less than five centimeters in size.

BOB DOUGHTY: Malaria kills about one million people a year and sickens another two hundred fifty million. Most of the deaths are in young children in Africa. People become infected when they are bitten by mosquitoes carrying the malaria parasite.

A new report estimates the possibility of ending malaria in countries that have the deadliest form of the disease. Researchers found that this could be possible in most parts of the world within ten to fifteen years. What it would require, they say, is reducing the spread of malaria by ninety percent from two thousand seven rates. 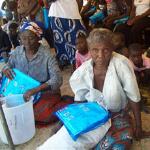 FAITH LAPIDUS: An international team created mathematical models and maps of areas where the disease is gone or almost gone. The report says malaria could be eliminated if countries are serious about using proven control measures like insecticides and bed nets.

The Bill and Melinda Gates Foundation partly financed the research. The study appears in The Lancet medical journal.

Some malaria experts expressed concern about giving too much attention to eliminating the disease. They say such a goal could take many years, if it is possible at all. The concern is that resources for controlling malaria could be lost if the money is spent instead on efforts to defeat it.

BOB DOUGHTY: A new study shows that long, severe droughts may strike countries with large populations in the not-so-distant future. The study was made for America's National Center for Atmospheric Research.

NCAR scientist Aiguo Dai led the research. It shows that drought conditions will threaten most of North and South America by the end of this century. The research found that large parts of Eurasia, Africa and Australia are also at risk. But places from Alaska to northern Europe may get more rainfall and snow. The findings appeared in the publication "Wiley Interdisciplinary Reviews: Climate Change."

FAITH LAPIDUS: In the study, Mr. Dai examined rising temperatures linked to climate change. He says the higher temperatures probably will create increasingly dry conditions. He says these conditions will be seen across much of the world in the next thirty years.

The scientist also considered the possibility that drought could be much worse by the end of the century. At that time, he says, lack of moisture in many places could be as bad as or worse than any in modern time.

He made the predictions after looking at earlier studies and research. His study used modern proposals of possible conditions. It also employed twenty-two computer climate models and a list of drought conditions. The International Panel on Climate Change used twenty-two models in its two-thousand-seven report.

BOB DOUGHTY: Mr. Dai said he based the new predictions on the best current projections of carbon dioxide and other gases linked to climate change. The projections are estimates of future amounts of such greenhouse gases. He says many conditions will decide what actually happens.

The conditions include natural climate cycles and the amount of greenhouse gases that will be released into the air. Two good examples of such cycles are El Nino and La Nina. They are periodic events that change moisture levels in the atmosphere.

FAITH LAPIDUS: The study identified areas threatened with major drying in the future. They include much of Central and South America. Southeast Asia, large parts of southwest Asia, and most of Africa and Australia also will be affected. The research shows that drying in areas along the Mediterranean Sea could also become intense.

Other areas were said to expect more moisture. They are much of Scandinavia, Russia, Canada and Alaska. The study shows that some areas of the Southern Hemisphere also may escape drought.

BOB DOUGHTY: Do not waste food, and you will save energy. That is the message of scientists who say America wastes food energy equal to about three hundred fifty million barrels of oil a year. That represents about two percent of yearly energy usage in the United States.

Scientists Amanda Cuellar and Michael Webber work at The University of Texas at Austin. They reported the findings last month in the journal "Environmental Science & Technology."

Mr. Webber says a lot more energy goes into food than people think. His report estimates that, three years ago, between eight and sixteen percent of all energy used in the United States supported food production.

FAITH LAPIDUS: The Texas researchers estimated the energy intensity of preparing food from agriculture, transportation, processing and food sales. They also included the energy intensity of storing and preparing food. The researchers measured food intensity in British thermal units, better known as BTUs. A BTU is the amount of heat energy needed to raise the temperature of about one-half kilogram of a substance by one degree Fahrenheit.

The scientists say they used information provided by the United States government from nineteen-ninety-five. At that time, the government estimated that twenty-seven percent of food for human consumption was wasted.

Last year, a report in the journal PLoS One considered the environmental effects of wasting food. Scientists from the National Institute of Diabetes and Digestive and Kidney Diseases measured the energy content of America's wasted food. They found that American waste of food per person has risen by about fifty percent since nineteen seventy-four.

FAITH LAPIDUS: This SCIENCE IN THE NEWS was written by Jerilyn Watson, Caty Weaver and June Simms, who was also our producer. I'm Faith Lapidus.

BOB DOUGHTY: And I'm Bob Doughty. Listen again next week for more news about science in Special English on the Voice of America.