In Domestic Violence Cases, Children Are Often the Forgotten Victims

Update Required To play the media you will need to either update your browser to a recent version or update your Flash plugin.
By June Simms and Caty Weaver
2011-10-20 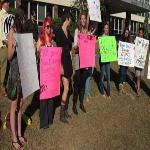 Photo: AP
A protest last week in Topeka, Kansas, where investigations of domestic abuse cases have been threatened over budget cuts

I'm Mario Ritter. Today we listen to new music from Feist. We also read some of your recent comments. But first we tell about the problem of domestic violence -- in America, and around the world.

MARIO RITTER: October is Domestic Violence Awareness Month in the United States. The observance seeks to educate the public about an issue which affects millions of people each year. June Simms has more.

JUNE SIMMS: Domestic violence experts from across the country gathered last week in Washington, DC. They took part in a special congressional briefing on the effects of domestic violence on children. A group called the Makers of Memories Foundation helped organize the event. Another organizer was the National Coalition Against Domestic Violence.

Five years ago, the United Nations published results of a study about domestic violence. It found that as many as two hundred seventy five million children worldwide witness violence in the home. These boys and girls represent a secret society of sufferers. Officials say they are the forgotten victims of domestic violence.

Research shows such children face a greater risk of problems in school, emotional disorders, and drug abuse, among other things. Some research has suggested that their experiences are severe enough to meet the requirements for Post Traumatic Stress Disorder.

Many children who witness violence at home grow up to become abusers or victims themselves. That is why the UN Children's Fund calls domestic violence "one of the most pervasive human rights challenges of our times."

The congressional hearing was held last week to educate American policy makers about the problem.

Domestic violence is defined as any form of behavior used to gain power or control over another person. It can include verbal, emotional, physical or sexual abuse.

The National Institute of Justice and the Centers for Disease Control say one in four American women will suffer some form of domestic violence in her lifetime. One and a half million women are physically attacked or raped each year. In the United States, three women die each day because of violence in the home.

The problem is believed to be even more widespread than these numbers suggest. Many cases of domestic violence are never reported. Victims often feel responsible for the abuse they suffer. They also experience a strong sense of shame or dishonor.

This is even truer among men, who are less likely to report abuse. Studies show that one in thirteen men in the United States is a victim of domestic violence.

Domestic Violence Awareness Month seeks to bring these issues out into the open, and to get more people involved in finding a solution. Officials say knowing the facts about domestic violence may help save lives and end the cycle of violence.

MARIO RITTER: Now, we take a look at some your comments about recent stories on AMERICAN MOSAIC.

Many of you wrote to express concern about the report on animals used in the movie industry. Several writers praised filmmakers who use digitally produced images of animals for movies instead of using live animals. One listener went even farther with that idea. Hasan from Turkey wrote "I believe that computer generated imagery should also replace the humans. Thus, film producers would not have to pay much money for the famous actors and actresses."

Hmmm ...this is an interesting idea, but one that labor unions for actors might oppose. 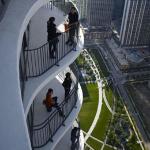 The unusually shaped balconies of Aqua

Several listeners sent comments after our story about building designer and MacArthur prize winner Jeanne Gang. A listener in Japan hoped that Ms. Gang's work would inspire other women to consider a career in architecture. And Loc from Vietnam has this to say about her wavy skyscraper in Chicago: "If I have a chance, I would lean from one of its balconies."

Another Vietnamese listener commented on our story about disabled men and women learning to surf. Thanh Vy wrote, "Disability doesn't mean you cannot do anything ... I really admire disabled people who overcome the physical hurt to get a better life."

Listeners were not so pleased to hear about how some Americans provide day care and costly treats to their pets. Florence from Togo noted people in the world who need help. She wrote that Americans should reduce their pet care spending and help people around them who are homeless.

Finally, our story on the new Martin Luther King Junior Memorial led to the most AMERIAN MOSAIC comments in September. Bhima Acharya-Baral in Nepal said he was impressed by King's "I Have a Dream" speech. And, he added, "His speech motivates everyone to universal brotherhood. I like his way to treat all equal." 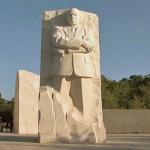 Valia Herman of Burkina Faso expressed similar praise. She wrote it is thanks to Martin Luther King "that the USA is a true land of equality and opportunity."

Thanks to everyone who sent us comments. And keep them coming. You may hear your own read on this program in the future.

BARBARA KLEIN: That is "How Come You Never Go There" from Feist's album, "Metals." It was the first single released. The song seems to question the emotional reach of one of two people in a relationship. Feist sings: "words are like a lasso, you're an instrumental tune." In other words, somebody is not talking. 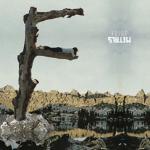 A cowboy using a rope can make a lasso to seize horses or other animals. There are other suggestions of America's Old West on "Metals." The song "Anti-Pioneer" is an example.

Feist recorded "Metals" in Big Sur, California. She had a studio specially built high on a cliff overlooking the water. Birds and other creatures would have surrounded the musicians. Perhaps that led to this song: "Cicadas and Gulls."

Feist will be performing in Europe and the United States through early February. We leave you with the song "Comfort Me" from her album "Metals."

MARIO RITTER: I'm Mario Ritter. Our program was written by June Simms and Caty Weaver, who was also our producer.