Update Required To play the media you will need to either update your browser to a recent version or update your Flash plugin.
By VOA
2011-6-9 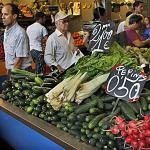 Photo: AP
Cucumbers for sale at a market in Malaga, Spain, in late May. At first, German officials blamed Spanish cucumbers for the E. coli outbreak. Import bans have now cost European farmers million of dollars.

European agriculture ministers met in Luxembourg this week to discuss the spread of E. coli bacteria. E. coli infections have killed at least thirty people since late May. Nearly three thousand others were sickened. Most of the victims were in Germany.

European officials have not been able to find the cause of the infections. At first, German officials suggested that cucumbers from Spain were to blame. Russia and other countries quickly banned vegetable imports from Spain and other European countries.

John Dalli of Malta is the European Union's Commissioner for Health and Consumer Policy. He spoke this week about the risk of passing judgment too soon.

JOHN DALLI: "It is crucial that national authorities do not rush to give information on source of infection which is not proven by bacteriological analysis, as this spreads unjustified fears in the population all over Europe, and creates problems for our food producers selling products in the EU and outside of the EU."

Russia has refused to end its ban on European vegetables. Prime Minister Vladimir Putin said his country will not lift the ban until the EU provides details about the source of the infections. Some critics say Russia is using the issue to gain entry to the World Trade Organization. Russia is the largest economy without WTO membership.

But that is not the only issue troubling Europe. European governments and the International Monetary Fund are considering as much as sixty-five billion dollars in new loans to Greece. Greek debt continues to drop in value as some officials now admit that earlier rescue loans were not enough.

This week, the Greek cabinet approved measures to cut budget deficits. But thousands of government workers protested the planned cuts on Thursday.

Separately, French Finance Minster Christine Lagarde is continuing her campaign to become the next head of the IMF. She visited China this week after traveling to India. Mexican Central Bank Chief Agustin Carstens also wants the job. He is seeking to become the first non-European to lead the international lender.And that's the VOA Special English Economics Report. I'm Mario Ritter.