Update Required To play the media you will need to either update your browser to a recent version or update your Flash plugin.
By Nancy Steinbach and Christopher Cruise
2011-1-3 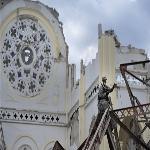 Photo: AP
An American soldier checks the wreckage inside the cathedral of Our Lady of Assumption in Port-au-Prince, Haiti on Tuesday Jan. 19, 2010,

STEVE EMBER: And I'm Steve Ember. Scientists who study the Earth tell us that the continents and ocean floors are always moving. Sometimes, this movement is violent and results in death and destruction. Today, we examine what causes earthquakes.

FAITH LAPIDUS: The first pictures of Earth taken from space showed a solid ball covered by brown and green landmasses and blue-green oceans. It appeared as if the Earth had always looked that way -- and always would.

Scientists now know, however, that the surface of the Earth is not as permanent as had been thought. Scientists found that the surface of our planet is always in motion. Continents move about the Earth like huge ships at sea. They float on pieces of the Earth's outer skin, or crust. New crust is created as melted rock pushes up from inside the planet. Old crust is destroyed as it moves toward the hot rock and melts again.

STEVE EMBER: In the twentieth century, scientists began to understand that the Earth is a great, living structure. Some experts say this new understanding is one of the most important revolutions in scientific thought. The revolution is based on the work of scientists who study the movement of the continents. This process is called plate tectonics.

Earthquakes are a result of that process. Plate tectonics is the area of science that explains why the surface of the Earth moves and how those changes cause earthquakes.

FAITH LAPIDUS: Scientists say the surface of the Earth is cracked like a giant eggshell. They call the pieces tectonic plates. As many as twenty of them cover the Earth. The plates slowly float around the Earth's surface. They sometimes crash into each other, and sometimes move away from each other.

STEVE EMBER: The movement of tectonic plates can cause earthquakes. Modern instruments show that about ninety percent of all earthquakes happen along a few lines in several places around the Earth.

These lines follow underwater mountains, where hot liquid rock flows up from deep inside the Earth. Sometimes, the melted rock comes out with a great burst of pressure. This forces apart pieces of the Earth's surface in a violent earthquake.

Other earthquakes take place at the edges of continents. Pressure increases as two plates move against each other. When this happens, one plate moves past the other, suddenly causing the Earth's surface to split open. 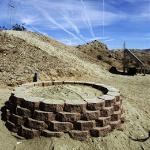 An earthquake monitoring station near the San Andreas Fault near Thermal, California

This line between the plates in California is called the San Andreas Fault. It is along or near this fault line that most of California's earthquakes take place, as the two tectonic plates move in different directions.

STEVE EMBER: The story of plate tectonics begins with the German scientist Alfred Wegener in the early part of the twentieth century. He proposed that the continents had moved and were still moving.

Wegener said the idea came to him when he saw that the coasts of South America and Africa could fit together like two pieces of a puzzle. He suspected that the two continents might have been one, then split apart.

Wegener said the continents had once been part of a huge area of land he called Pangaea. He said the huge continent had split more than two hundred million years ago. And, he said the pieces were still floating apart.

FAITH LAPIDUS: Alfred Wegener investigated the idea that continents move. He pointed out a line of mountains that appears from east to west in South Africa. Then he noted another line of mountains that looks almost exactly the same in Argentina, on the other side of the Atlantic Ocean. He found fossil remains of the same kind of an early plant in areas of Africa, South America, India, Australia and even Antarctica.

Wegener said the mountains and fossils were evidence that all the land on Earth was united at some time in the distant past.

FAITH LAPIDUS: Support for Alfred Wegener's ideas did not come until the early nineteen-fifties. Two American scientists found that the continents moved as new sea floor was created under the Atlantic Ocean. Harry Hess and Robert Dietz said a thin valley in the Atlantic Ocean was a place where the ocean floor splits. They said hot melted material flows up from deep inside the Earth through the split. As the hot material reaches the ocean floor, it spreads out, cools and hardens. It becomes new ocean floor.

The two scientists proposed that the floor of the Atlantic Ocean is moving away from each side of the split. The movement is very slow -- a few centimeters a year. In time, they said, the moving ocean floor is blocked when it comes up against the edge of a continent. Then it is forced down under the continent, deep into the Earth, where it is melted again.

Harry Hess and Robert Dietz said this spreading does not make the Earth bigger. As new ocean floor is created, an equal amount is destroyed.

STEVE EMBER: The two scientists said Alfred Wegener was correct. The continents do move as new material from the center of the Earth rises, hardens and pushes older pieces of the Earth away from each other. The continents are moving all the time, although we cannot feel it.

They called their theory "sea floor spreading." The theory explains that as the sea floor spreads, the tectonic plates are pushed and pulled in different directions.

FAITH LAPIDUS: The idea of plate tectonics explains volcanoes as well as earthquakes. Many of the world's volcanoes are found at the edges of plates, where geologic activity is intense. The large number of volcanoes around the Pacific plate has earned this area the name "Ring of Fire."

Volcanoes are also found in the middle of plates, where there is a well of melted rock. Scientists call these wells "hot spots." A hot spot does not move. However, as the plate moves over it, a line of volcanoes is formed.

The Hawaiian Islands were created in the middle of the Pacific Ocean as the plate moved slowly over a hot spot. This process is continuing, as the plate continues to move.

STEVE EMBER: Volcanoes and earthquakes are among the most frightening events that nature can produce. More than two hundred thousand people were killed when a strong earthquake struck Haiti last January twelfth. The United States Geological Survey said it was the strongest earthquake to hit Haiti in a century.

Homes where about two million people lived were destroyed, in a nation of about nine million people. Investigators blamed the destruction on the poor quality of many buildings and a lack of earthquake-resistant structures. A year after the quake, many Haitians are still living in temporary shelters. At times like these, we remember that the Earth is not as solid and unchanging as people might like to think.

FAITH LAPIDUS: This SCIENCE IN THE NEWS program was written by Nancy Steinbach and Christopher Cruise. Our producer was Dana Demange. I'm Faith Lapidus.

STEVE EMBER: And I'm Steve Ember. Join us again next week for more news about science in Special English on the Voice of America.