Update Required To play the media you will need to either update your browser to a recent version or update your Flash plugin.
By Mario Ritter
2010-3-4 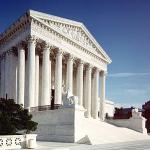 Photo: supremecourtus.gov
The Supreme Court continues to define the rights of corporations

Recently the United States Supreme Court decided a big case about political speech. The question was this: With political speech, do corporations have the same rights as people?

By a vote of five to four, the conservative majority on the court decided yes. Companies, labor unions and other organizations may now spend as they wish on independent efforts to elect or defeat candidates.

The ruling is based on the idea in the United States and many other countries that a corporation is a legal person.

In the ruling, Chief Justice John Marshall described a corporation as an "artificial being" that is a "creature of the law."

The ruling was unpopular. It came as Americans resisted big corporations like the First Bank of the United States, chartered by Congress. Some states passed laws permitting themselves to change or even cancel corporate charters.

At first, corporations were not fully recognized as persons. But Jeff Sklansky at Oregon State University says that changed.

JEFF SKLANSKY: "The general direction of the Supreme Court and the federal courts in general was to recognize corporations as persons with the same Fourteenth Amendment rights as individuals."

JEFFREY SKLANSKY: "That is also crucial to allowing corporations a kind of independent personhood and separating ownership from control or ownership from management. So [the idea is] that I can invest in a corporation without becoming liable for all its debts. That's a really big deal. Without it, anything like the modern stock market, I'd say, is impossible."

And that's the VOA Special English Economics Report, written by Mario Ritter. Next week, more on corporations and the law. I'm Steve Ember.