Reform of Financial System Is Obama's Next Goal in Congress

Update Required To play the media you will need to either update your browser to a recent version or update your Flash plugin.
By Mario Ritter
2010-4-15 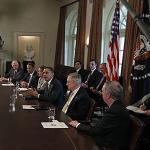 Photo: AP
President Obama meeting with congressional leaders at the White House on Wednesday
This is the VOA Special English Economics Report.

He met Wednesday with congressional leaders from both parties at the White House. Republicans and Democrats differ on what to do. But the president says there are some areas on which both sides can agree.

BARACK OBAMA: "If there's one lesson that we've learned, it's that [an] unfettered market where people are taking huge risks and expecting taxpayers to bail them out when things go sour is simply not acceptable."

Treasury Secretary Tim Geithner wrote in the Washington Post that the deep financial crisis is close to the end. But he said the nation must not forget the near-collapse of the banking system in two thousand eight without fixing its causes.

On Tuesday, he told the American Society of News Editors in Washington that no one is arguing against new financial protections. The debate now, he said, is more complex.

TIM GEITHNER: "How do you make sure you are designing a system where you are going to constrain risk taking, you can prevent crises from spreading, and -- if a major institution managed itself to the edge of the abyss -- that we are able to put them out of their misery."

The aim is to find a way to let big financial companies fail without harming the economy.

In December, the House of Representatives passed the Wall Street Reform and Consumer Protection Act. That bill would create a new consumer financial protection agency. It would also increase investor protections and let shareholders vote on the pay of top company officials. And it would create a group to identify and regulate companies that are so big, their failure could threaten the economy.

Republicans opposed the bill. That was also true last month when the Senate Banking Committee approved its own version. That bill would not create an independent consumer agency, but instead a new office at the Federal Reserve, the central bank.

Both measures in Congress call for a system to supervise derivatives. These contracts are used for different purposes, including investment and protecting against loss. The largely unregulated market in derivatives is estimated at six hundred trillion dollars.

Government rescues of banks considered "too big to fail" angered the public and helped fuel a conservative movement. The Tea Party also opposes the new health care law and argues for lower taxes and less government.

On Thursday they protested to mark Tax Day, when Americans have to pay any federal taxes they owe.