Update Required To play the media you will need to either update your browser to a recent version or update your Flash plugin.
By Nancy Steinbach
2008-12-17

For the past two weeks, we have talked about the SAT and ACT college admissions tests and the GRE for graduate school. This week in our Foreign Students Series, we move on to English language tests. 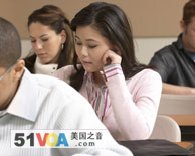 Most American colleges and universities accept one or both of the two major tests. One is the Test of English as a Foreign Language, known as the TOEFL. The other is the International English Language Testing System, or IELTS.

One million people each year take the TOEFL, says Tom Ewing, a spokesman for the Educational Testing Service. Same with the IELTS, says Beryl Meiron, the executive director of IELTS International.

She says two thousand colleges and universities in the United States now recognize the IELTS. Schools might accept it only for undergraduate or graduate admission or both.

The IELTS is a paper test, while the TOEFL is given on paper only in places where a computer test is unavailable.

The computer version is called the TOEFL iBT, or Internet-based test. The price is different in each country, but generally falls between one hundred fifty and two hundred dollars.

The TOEFL iBT and the IELTS both measure all four language skills -- listening, reading, writing and speaking. But with the IELTS, the speaking test is done separately as a live interview. You speak with an examiner who is certified in ESOL -- English for speakers of other languages.

Everyone takes the same speaking and listening tests. But there is a choice of two kinds of reading and writing tests -- either academic or general training.

IELTS International says the test measures true-to-life ability to communicate in English for education, immigration and employment. Institutions in Britain and Australia jointly developed it.

The cost is different in each country. But Beryl Meiron says the price in local currency is generally comparable to about one hundred sixty dollars. The IELTS Web site is ielts.org. The TOEFL Web site is toefl.org.