Too Few Women in Science

Update Required To play the media you will need to either update your browser to a recent version or update your Flash plugin.
By Nancy Steinbach
2010-3-31 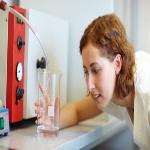 Two new studies look at reasons women are underrepresented in science professions in the United States.

Two new studies have investigated why fewer females, compared to males, study and work in the so called STEM subjects in the United States. Those subjects are science, technology, engineering and mathematics.

The American Association of University Women examined existing research. Its report, called "Why So Few?," also suggested ways to interest more girls and women in the STEM fields. The researchers found that cultural and environmental factors make a difference.

CHRISTIANNE CORBETT: "In those countries, more girls than boys actually scored above the ninety-ninth percentile in math. This is something that we point out in our report just says further evidence that cultural factors and societal factors can make a difference in who achieves at the very high levels and if girls are achieving or not."

The other study was carried out by the Campos company for the Bayer Corporation in the United States. It asked more than one thousand women and minority members of the American Chemical Society about their experiences. Seventy-seven percent said not enough women and minorities are working in STEM professions today. This is because they were not identified or urged to study those subjects in school. Bayer USA Executive Director Rebecca Lucore says its study produced results similar to the AAUW research.

REBECCA LUCORE: "I think that what our recent survey showed is there's still a lot of work to be done. We see that you know from everyone, they say their interest in science begins before the age of eleven. So we need programs that really, and from industry's perspective too, get in front of kids while they're young in elementary school."

Why is it so important for girls and women to be involved in science? Christianne Corbett has one answer.

CHRISTIANNE CORBETT: "Increasing diversity in professions leads to better products, better science, just generally. And expanding and developing this science and engineering workforce is critical to the nation's economic innovation and productivity and competitiveness."

REBECCA LUCORE: "It's just about having scientifically literate citizens. It's really important no matter what career you go into if it's accounting or human resources or science career that you can think critically and creatively, you can work in teams, you can adapt to change and that's important for everybody."

And that's the VOA Special English Education Report, written by Nancy Steinbach. Is science a popular field of study for girls in your country? You can comment at 51voa.com. I'm Barbara Klein.