Higher Education in US: What Does It Cost?

Update Required To play the media you will need to either update your browser to a recent version or update your Flash plugin.
By Nancy Steinbach
2010-4-7 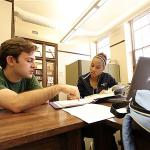 Today we answer a question from a listener in Colombia. John Anderson wants to know the costs of undergraduate and graduate study in the United States.

Well, the first thing to know is that prices are different from school to school. Private colleges and universities generally cost more than public ones.

Another thing to keep in mind is that not all students pay a school's "published price." Financial aid and scholarships may reduce the cost. Here are a few numbers for this school year from the College Board organization.

This is the bad news -- international students often have to pay the highest prices.

And these averages were only for tuition and fees. Food, housing, books and supplies can add ten to twelve thousand dollars a year.

The College Board says the average tuition at a private college was about twenty-six thousand dollars.

Many students save money by starting their education at a two-year public college, also known as a community college. The average tuition this year was about two thousand five hundred dollars.

A few American colleges provide a free education, including the military and Merchant Marine academies. They accept some foreign students.

Berea College is a small Christian school in Berea, Kentucky, that pays all first-year costs for its foreign students. But they are expected to pay one thousand dollars a year after that. Summer jobs are provided to help meet this cost.

Costs for graduate study in the United States also differ from school to school, and even from program to program. Here too, public universities charge more for out-of-state tuition. For example, at the University of Kentucky, out-of-state graduate tuition averaged about eighteen thousand dollars this year. In-state was about nine thousand.

American students often have to take out loans to help pay for their education. President Obama recently signed into law a bill that changes the student loan system. We'll have more on that next week.

And international students can learn much more about studying in the United States on our Web site. Look for the Foreign Student Series at 51voa.com.