Update Required To play the media you will need to either update your browser to a recent version or update your Flash plugin.
By Shelley Gollust
2011-10-22 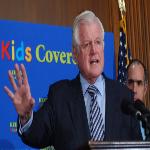 BARBARA KLEIN: And I'm Barbara Klein with PEOPLE IN AMERICA in VOA Special English. Today we tell about Senator Edward Kennedy. He served in the United States Senate from the state of Massachusetts for almost forty-seven years. He was one of its longest-serving and most influential members. He was the Senate's leading liberal Democrat. But his life was filled with tragedy as well as success.

STEVE EMBER: Edward Kennedy was a member of the most famous political family in America. He was born in nineteen thirty-two in Boston, Massachusetts. Known as Ted or Teddy, he was the youngest of nine children born to the Irish Catholic family of Joseph and Rose Kennedy. His father was a wealthy businessman with powerful connections.

During his childhood, the future senator attended ten different schools in several cities before he started college. He attended Harvard University as had his father and brothers. He served two years in the Army in the nineteen fifties. Then he attended law school at the University of Virginia. 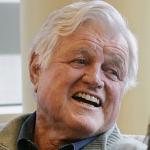 Senator Kennedy was diagnosed with a brain tumor in 2008

The next year, Edward Kennedy was elected to the Senate seat formerly held by his brother John. John Kennedy was killed in nineteen sixty-three after only two years as president.

STEVE EMBER: In nineteen sixty-eight, Robert Kennedy, a senator from New York, sought the Democratic nomination for president. He was killed in Los Angeles after winning the primary election in California. Edward Kennedy spoke at his brother Robert's funeral:

EDWARD KENNEDY: "My brother need not be idealized, or enlarged in death beyond what he was in life; to be remembered simply as a good and decent man who saw wrong and tried to right it, saw suffering and tried to heal it, saw war and tried to stop it."

BARBARA KLEIN: After the death of Robert, the youngest Kennedy brother became the family's political leader. It first appeared that he might have a clear path to the White House. But those hopes ended in nineteen sixty-nine.

Senator Kennedy drove his car off a bridge on Chappaquiddick Island in Massachusetts. A passenger in his car, Mary Jo Kopechne, was killed. The car sank in the water but Ted Kennedy was able to escape. He left the accident and waited hours before he reported it to the police.

A week later, he pleaded guilty to a charge of leaving an accident and was given a two-month suspended sentence. This incident greatly harmed his public image. Ted Kennedy asked voters in Massachusetts whether he should resign from the Senate. He received thousands of messages telling him not to quit.

STEVE EMBER: In nineteen eighty, he sought the Democratic presidential nomination. But Democrats nominated President Jimmy Carter for a second term. Defeated for the nomination, Senator Kennedy spoke at the Democratic Convention.

EDWARD KENNEDY: "For all those whose cares have been our concern, the work goes on, the cause endures, the hope still lives and the dream shall never die."

BARBARA KLEIN: After the deaths of his brothers, Ted Kennedy became the head of his extended family. He acted like a father to his thirteen nieces and nephews, the children of his dead brothers.

Through the years he dealt with many family problems. His son Teddy lost his leg to cancer at the age of twelve in nineteen seventy-three. His other children, Patrick and Kara, also had health problems. He and his wife Joan ended their marriage in nineteen eighty-two.

Three of Mister Kennedy's nephews died young and tragically. Another was tried and found not guilty of rape charges in nineteen ninety-one. The senator was called to testify at the trial.

Edward Kennedy had his own problems with drinking and women. But his life became more steady after he remarried. He married Victoria Reggie in nineteen ninety-two. 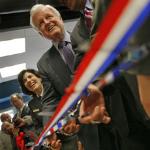 Senator Kennedy takes part in a ribbon cutting ceremony during the opening of the Corson Building in New Bedford, Mass

STEVE EMBER: In the Senate, Ted Kennedy wrote hundreds of bills and supported thousands of others. Early in his career, he continued President Kennedy's desire for social change by helping to pass the Civil Rights Act of Nineteen Sixty-four. The law banned racial discrimination in the workplace.

Senator Kennedy worked for improved health care, education and immigration reform. He worked for civil rights, voting rights and workers' rights. He worked to end discrimination against people with physical and mental disabilities. His efforts resulted in the Americans with Disabilities Act in nineteen ninety.

He often worked with senators from the Republican Party to get laws passed. Republican Senator John McCain, the party's presidential candidate in two thousand eight, praised him for his ability to reach across party lines to pass important legislation.

JOHN MCCAIN: " When we agreed on an issue and worked together to make a little progress for the country on an important issue, he was the best ally you could have. You never even had a small doubt that once his word was given, and a course of action decided, he would honor the letter and the spirit of the agreement."

BARBARA KLEIN: Senator Kennedy worked closely with President George W. Bush to pass an important education bill in two thousand one. But he was a critic of the Bush administration on many other issues, including the war in Iraq. He was one of only twenty-three senators who voted in two thousand two against supporting the invasion of Iraq.

While he was best known for his legislative battles for America's poor and disabled people, Senator Kennedy was also a leader in foreign policy. He was a strong voice for ending America's war in Vietnam in the nineteen seventies.

In nineteen eighty-five, he led the congressional effort to order economic restrictions on South Africa because of its racial separation policy. His Refugee Act of Nineteen Eighty aided refugees around the world. He helped negotiate the peace agreement for Northern Ireland in nineteen ninety-eight.

Ted Kennedy was well liked in the Senate because of his hard work, friendliness and sense of humor. In two thousand six, Time magazine chose him as one of "America's Ten Best Senators." The magazine noted that he had supported a huge amount of important legislation that affected the lives of just about every man, woman and child in the country. He became known as "the liberal lion of the Senate."

STEVE EMBER: In two thousand eight, Ted Kennedy was one of the first top Democrats to support a young senator seeking the party's nomination for president.

EDWARD KENNEDY: "My friends, I ask you to join in this historic journey to have the courage to choose change. It is time again for a new generation of leadership. It is time now for Barack Obama."

STEVE EMBER: That same year, doctors discovered a deadly brain tumor, which limited his ability to work. He spent time with his family, sailing on his beloved boat. However, he made a surprise appearance at the Democratic National Convention to support Barack Obama's candidacy for president.

Senator Kennedy also asked for support for the cause of his life, "that we will break the old gridlock and guarantee that every American ... will have decent quality health care as a fundamental right and not a privilege."

BARBARA KLEIN: Edward Kennedy died on August twenty-fifth, two thousand nine, at the age of seventy-seven. Three former American presidents were among the mourners who attended his funeral at a Catholic church in Boston.

Ted Kennedy's children, grandchildren, nieces and nephews spoke at the funeral service. They included his son Patrick, a member of the House of Representatives from Rhode Island. The young people offered prayers for some of his beloved causes.

President Obama was the last speaker at the funeral. He said Ted Kennedy has gone home to join the loved ones he had lost.

BARACK OBAMA: "At last he is with them once more, leaving those of us who grieve his passing with the memories he gave, the good he did, the dream he kept alive, and a single, enduring image. The image of a man on a boat, white mane tousled, smiling broadly as he sails into the wind, ready for whatever storms may come, carrying on toward some new and wondrous place just beyond the horizon."

BARBARA KLEIN: Edward Kennedy was buried at Arlington National Cemetery in Virginia near his brothers, John and Robert.

BARBARA KLEIN: And I'm Barbara Klein. You can download this program and others from our Web site, 51voa.com. Join us again next week for PEOPLE IN AMERICA in VOA Special English.