Effort to Enforce 'Net Neutrality' in US Takes New Path

Update Required To play the media you will need to either update your browser to a recent version or update your Flash plugin.
By Mario Ritter
2010-5-20 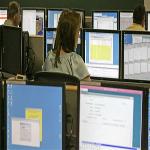 Officials in Washington recently lost a ruling over their power to enforce competition on the Internet. Now the Federal Communications Commission has a new plan.

The F.C.C. currently defines high-speed Internet as an information service. As such, its powers to set rules for broadband service have never been clearly recognized. But telephone service is a recognized area for the agency to regulate. So the F.C.C. proposes to redefine broadband as a telecommunications service.

Congress could give the agency clearer powers over broadband. But F.C.C. Chairman Julius Genachowski calls his plan "a third way."

He says the commission would act narrowly and enforce only parts of existing law. He says the government is not regulating the Internet. The changes are meant to support net neutrality -- the idea that all Web traffic should be treated equally.

Last month's ruling by a federal appeals court involved Internet service provider Comcast. The judges ruled that the F.C.C. had no legal basis for an effort to keep Comcast from limiting access to some services over its network. The company said file-sharing users were slowing its traffic.

As it happens, the plan was announced on May sixth -- the same day as the "flash crash" on American stock markets. The Dow Jones Industrial Average briefly suffered a severe drop.

On Tuesday, the Securities and Exchange Commission announced new "circuit breakers" to support orderly trading. The plan involves the Standard and Poor's list of five hundred stocks. Stock exchanges have agreed to temporarily halt trading of any stock that rises or falls ten percent or more within five minutes. The rules will be re-examined in six months and could be expanded.

And, in another development, the Senate voted Thursday to permit final debate and a vote on a financial reform bill. The House of Representatives has passed its own bill already. The House and Senate versions will need to be combined into final legislation for President Obama to sign into law.

The proposed changes in financial rules are the most extensive since the nineteen thirties. The president says the aim is not to punish banks but to protect the larger economy and the American people.