Egypt Not Alone in Its Economic Problems

Update Required To play the media you will need to either update your browser to a recent version or update your Flash plugin.
By Mario Ritter
2011-2-3 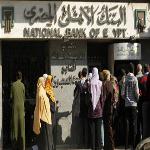 Photo: AP
People in Cairo wait to withdraw money from the bank. Egypt's money has dropped in value to its lowest level in 6 years

Egypt is the biggest of the nations hit by recent protests in North Africa and the Middle East. One of the causes of this spreading wave of popular dissatisfaction is a lack of economic progress.

Egypt is not a major oil exporter and its economy is not big enough to affect world economic growth. But important pipelines cross Egypt. And Egypt controls the Suez Canal. About eight percent of world shipping passes through this link between Europe and Asia. That includes two million barrels of oil each day, mainly to Europe.

Many experts say they expect the canal to remain open. Still, concerns about the Suez have pushed oil prices to their highest levels since two thousand eight.

Fariborz Ghadar heads the Center for Global Business Studies at Penn State University. He says poverty in Egypt remains high -- up to forty percent in some areas.

Yet Egypt is not alone. Foreign investors worry about corruption, mismanagement and security problems across North Africa and the Middle East.

Every year millions of young people enter the job market. Populations are young and fast growing. In Egypt, the economy grew about five percent last year -- too little growth to create enough jobs.

FARIBORZ GHADAR: "Europe and the US together generate three million jobs. [The] Middle East alone to keep their youth employed has to generate six, seven, eight million jobs. So they have to produce two or three times as many jobs as the total US and total European economies."

FARIBORZ GHADAR: "So the mismanagement of the Iranian economy could in fact see a backlash of the Iranian population because their food prices are going up too. Their inflation is going up, too."

The World Bank has praised Egypt for cutting barriers to trade. But economist Deborah Hewitt at the College of William & Mary in Virginia says private foreign investment remains weak. She says those investments have grown quickly from almost nothing eight years ago. But they are still not enough to lift the economy.

Professor Hewitt says Egypt could look to reforms in Morocco that have appealed to investors. Morocco has strengthened its education system and invested in roads, ports and electric power. She says investments like these not only put people to work. They also create the basis for future economic -- and political -- development.

DEBORAH HEWITT: "With economic growth and expansion comes the desire for more political freedom. And the two go hand in hand. They feed on each other."