Update Required To play the media you will need to either update your browser to a recent version or update your Flash plugin.
By Paul Thompson
2011-7-5 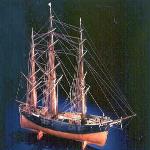 Photo: si.edu
A model of the Flying Cloud

SHIRLEY GRIFFITH: And I'm Shirley Griffith with Explorations in VOA Special English. Today, we tell about Eleanor Creesy. She helped to guide one of the fastest sailing ships ever built.

STEVE EMBER: The name Eleanor Creesy is almost unknown today. But in the middle eighteen hundreds she was a famous woman. Those were the days of wooden sailing ships. It was a time before ships had engines. Cloth sails were used to catch the wind to move a ship through the water.

A ship that sailed from New York to San Francisco had to travel around the bottom of South America. Such a trip could take two hundred days to complete. Not all ships completed the trip. The high winds and angry seas in this area of the world created deadly storms. Ships often sank. No one could survive the freezing waters in this dangerous area if the ship went down.

SHIRLEY GRIFFITH: One hundred fifty years ago, women did not receive much education. Most women were expected to learn to read and write. But they almost never held positions of great responsibility. Eleanor Creesy was different. She was the navigator for a ship. A navigator is responsible for guiding a ship safely from one port to another.

Eleanor's father taught her to navigate. She wanted to learn this difficult skill because she liked the mathematics involved. A navigator also had to know how to use a complex instrument called a sextant. It was used to gather information about the sun, moon, and some stars to find a ship's position at sea.

Eleanor married a captain of a ship, Josiah Perkins Creesy, in eighteen forty-one. It was not unusual for a ship captain to take his wife with him on long trips. A captain's wife often acted as a nurse, which Eleanor did. But she did a lot more. Josiah Creesy quickly learned that his wife was an extremely good navigator.

Eleanor was the navigator on each ship that Josiah commanded during all their years at sea. They were husband and wife, but they also enjoyed working together.

STEVE EMBER: Eleanor and Josiah Creesy are forever linked to one of the most famous ships in American history. That ship is the Flying Cloud. It was designed and built at the shipyard of Donald McKay in the eastern city of Boston. Grinell, Minturn and Company bought it. Captain Creesy worked for Grinell, Minturn. Company officials chose him to be the captain of the new ship.

The Flying Cloud was a new kind of ship. The front was very narrow and sharp. This helped it cut through the water. The ship itself was narrow and long. This also added to its speed. A New York newspaper wrote a story about the ship when it was new. The paper said it was extremely beautiful. The world soon learned it was one of the fastest sailing ships ever built.

The large number of sails the Flying Cloud could carry increased the speed of the ship. It usually carried at least twenty-one large sails. The crew often added many more to increase the speed.

SHIRLEY GRIFFITH: It was the second day of June, eighteen fifty-one. Goods and passengers had been loaded on the Flying Cloud. The ship quietly sailed out of New York City on its way to San Francisco.

Very quickly it became evident the ship was special. Part of Eleanor Creesy's work was to find out how far the ship had traveled each day. This involved doing complex mathematics and usually took Eleanor several hours. The first time she completed her work, she could not believe the results. She did the mathematics again, carefully looking for mistakes. There were none.

The ship had traveled almost four hundred eighty kilometers in twenty-four hours. This was an extremely fast speed. Few ships had ever sailed this fast.

STEVE EMBER: The captain of a ship keeps a written record of each day's events when a ship is at sea. This record is called a ship's log. On May fifteenth, just seventeen days after leaving New York, Captain Creesy wrote this in the Flying Cloud's log:

"We have passed the Equator in two days less time than ever before. We have traveled five thousand nine hundred and nine kilometers in seventeen days!"

As the Flying Cloud sailed south, each day was extremely exciting. As it neared the South Atlantic, however, storms began to cause great concern.

For Eleanor Creesy to learn the correct position of the ship each day, she had to be able to see the sun, the moon or stars. This was impossible when the ship entered an area of storms. It was then that her greatest skill as a navigator became extremely important.

SHIRLEY GRIFFITH: When bad weather prevented navigators from seeing the sun, moon or stars, they had to use a method called "dead reckoning" to find the ship's position.

Dead reckoning is not exact. A navigator would take the last known position of the ship, then add the ship's speed. The navigator also had to add any movement of the ship to the side caused by waves or the wind. But this information was only a guess. Even a good navigator could be wrong by many kilometers.

If a ship was sailing in the middle of the ocean, a navigator could make mistakes using dead reckoning and no harm would be done. However, when a ship was near land, dead reckoning became extremely dangerous. The ship might be much closer to land than the navigator knew. In a storm, the ship could be driven on to land and severely damaged or sunk. Using dead reckoning near the southern most area of South America called for an expert.

The Flying Cloud was near land at the end of the South American continent. Eleanor Creesy used all her skill to find a safe path for the huge ship.

STEVE EMBER: Captain Creesy was responsible for the safety of the Flying Cloud, the passengers and crew. He would be blamed for any serious accident. Most captains did their own navigating. Perhaps no other captain sailing at that time would think to have a woman do this extremely important work. However, Josiah Creesy never questioned his wife's sailing directions.

He would often stand on the deck of his ship, in the cold rain and fierce winds. He would shout below to Missus Creesy and ask for a new sailing direction. She would quickly do the work required for a new dead reckoning direction and pass the information to her husband. Captain Creesy would give the orders to turn the big ship.

SHIRLEY GRIFFITH: The storm began to grow. The crew put out the fires used for heat and cooking. Fire was a great danger at sea. No fires were ever permitted on a ship during a storm. Not even lamps were lit. Everyone ate cold food. The temperatures were now near freezing.

When the storm ended, the crew of the Flying Cloud could see the very southern coast of South America -- a place called Tierra del Fuego. They could see the snow-covered mountains and huge amounts of blue ice. It was an area of deadly beauty. And, it was only eight kilometers away. Eleanor Creesy had guided the ship perfectly.

STEVE EMBER: The Flying Cloud sailed north toward San Francisco traveling at speeds no one thought possible. On July thirty-first, the ship traveled six hundred and one kilometers in only twenty-four hours. No ship had ever sailed that far in one day. The Flying Cloud had set a world record. That record belonged to the ship, the crew, the captain and the navigator.

This time they made the trip in eighty-nine days, eight hours. This record would stand unbroken for more than one hundred years.

SHIRLEY GRIFFITH: Josiah and Eleanor Creesy went on to sail in other ships. They continued to work as a team until they left the sea in eighteen sixty-four. They retired to their home in Massachusetts.

Captain Josiah Creesy died in June of eighteen seventy-one. His wife lived until the beginning of the new century. She died at the age of eighty-five, in August of nineteen hundred.

Eleanor Creesy is remembered by anyone who loves the history of the sea. She is honored for her great skill as navigator of the Flying Cloud, one of the fastest sailing ships the world has ever seen.

STEVE EMBER: This program was written by Paul Thompson. It was produced by Cynthia Kirk. I'm Steve Ember.

STEVE EMBER: And I'm Shirley Griffith. You can read scripts and download audio on our Web site, 51voa.com. Join us again next week for Explorations in VOA Special English.