Update Required To play the media you will need to either update your browser to a recent version or update your Flash plugin.
By Nancy Steinbach
2010-7-3 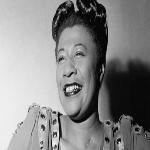 Photo: americaslibrary.org
Critics say the best songbook is Ella singing the songs of George and Ira Gershwin. Ira Gershwin reportedly said: "I never knew how good our songs were until I heard Ella Fitzgerald sing them."

SHIRLEY GRIFFITH: The year was nineteen thirty-three. The place was New York City. Ella Fitzgerald was sixteen years old. She had entered a competition at the Apollo Theater in Harlem. She was going to dance. But she had just watched two dancers perform. They were better dancers than she.

So, instead of dancing, she sang a song called "Judy. " People watching the competition urged her to sing another song. She did. She won first prize - twenty-five dollars.

That competition at the Apollo Theater changed Ella Fitzgerald's life forever. Band leader Chick Webb was watching the competition. He hired Ella to sing with his band. He taught her about singing in public. He even showed her what kind of clothes to wear. In three years, she had her first hit record, "A-Tisket-a-Tasket":

STEVE EMBER: Ella Fitzgerald was born in the southern city of Newport News, Virginia in nineteen seventeen. Her father left soon after her birth. Her mother took Ella and moved to New York City. Ella's mother died when Ella was fifteen years old.

The next year, Ella started singing with Chick Webb's band. She stayed with Chick Webb until he died in nineteen thirty-nine. Ella kept his band together after he died until World War Two started. Then most of the band members joined the armed forces. While she was with the band, Ella recorded almost one hundred fifty songs. Ella Fitzgerald performed in concerts around the world and became popular internationally.

SHIRLEY GRIFFITH: Ella Fitzgerald was greatly influenced by the experimental music of Charlie Parker and Dizzy Gillespie. It was called be-bop. She used be-bop rhythms in her singing. In nineteen forty-five, she recorded the song "Flying Home," using the be-bop method known as "scat". In scat, the singer's voice sounds like another instrument in the orchestra. Critics say it was the most influential jazz record of the time.

STEVE EMBER: In nineteen forty-nine, jazz musician Norman Granz invited her to join his band. It was with his band in Berlin, Germany in nineteen sixty that Ella sang a famous song in a very different way. A man asked her if she knew the song "Mack the Knife." Ella said she had heard it a few times but the band did not have the music for it. She said she would try to sing it anyway. This recording shows how she continued to sing "Mack the Knife" when she did not remember the words. The people listening loved it.

SHIRLEY GRIFFITH: Norman Granz later became her manager. He started a new recording company just for her. It was his idea for Ella to record the now famous series of record albums called the "Songbooks." On each record, she sang works of a different songwriter.

She recorded songbooks of the music of Cole Porter, Irving Berlin, Duke Ellington, Jerome Kern, Johnny Mercer and Harold Arlen. Critics say the best songbook is Ella singing the songs of George and Ira Gershwin. Ira Gershwin reportedly said: "I never knew how good our songs were until I heard Ella Fitzgerald sing them. Here, she sings the Gershwin song, "I Got Rhythm":

STEVE EMBER: Ella Fitzgerald also appeared in movies and on television. She became popular internationally. She performed in concerts around the world sometimes forty weeks a year. She also recorded for different record companies.

In the nineteen sixties, she began to sing more modern songs such as those written by the Beatles and Burt Bacharach. But she was not very successful with that kind of popular music. She returned to jazz in Nineteen seventy-three, again with Norman Granz. She also began performing with symphony orchestras. She also appeared in movies and on television.

SHIRLEY GRIFFITH: Ella Fitzgerald was married two times. Both marriages ended in divorce. She raised three children who were not her own.

Ella lived quietly in Beverly Hills, California. Throughout her life she was a very private person. She wanted to be known only for her music. Her friends included members of the Duke Ellington band, Count Basie's band, and singers like Sarah Vaughn and Peggy Lee.

Ella Fitzgerald began to have health problems during the nineteen seventies. She had the disease diabetes which caused problems with her eyes. She had a heart operation in nineteen eighty-six. In nineteen ninety-three, the effects of diabetes led to operations to remove both her legs. She died June fifteenth, nineteen ninety-six.

STEVE EMBER: People around the world loved Ella Fitzgerald's joyful singing. Critics said she had raised the American popular song to the level of art.

She won many awards. She received the National Medal of the Arts and a Kennedy Center Honor for lifetime work. The University of Maryland named a performing arts center for her.

Ella Fitzgerald's wonderful voice lives on in her two hundred fifty albums. She won thirteen Grammy awards given each year for the best recordings. Her last Grammy was for the nineteen ninety record: "All That Jazz":

SARAH LONG: This Special English program was written by Nancy Steinbach. The announcers were Shirley Griffith and Steve Ember. I'm Sarah Long. Listen again next week for another PEOPLE IN AMERICA program on the Voice of America.