Update Required To play the media you will need to either update your browser to a recent version or update your Flash plugin.
By Richard Thorman
2011-6-25 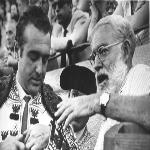 DOUG JOHNSON: And I'm Doug Johnson with People in America, a program about people who are important in the history of the United States. Today we present the second part of the story of Ernest Hemingway's life and writings.

SHIRLEY GRIFFITH: At twenty-five, Hemingway was living in Paris. He was a famous writer. But the end of his first marriage made him want to leave the place where he had first become famous.

Years later he said: "The city was never to be the same again. When I returned to it, I found it had changed as I had changed. Paris was never the same as when I was poor and very happy."

DOUG JOHNSON: Hemingway and his new wife returned to the United States in nineteen twenty-eight. They settled in Key West, an island with a fishing port near the southern coast of Florida.

Before leaving Paris, Hemingway sent a collection of his stories to New York to be published. The book of stories, called "Men Without Women," was published soon after Hemingway arrived in Key West.

One of the stories was called "The Killers." In it, Hemingway used a discussion between two men to create a feeling of tension and coming violence. This was a new method of telling a story

STORYTELLER: Nick opened the door and went into the room. Ole Andreson was lying on the bed with all his clothes on. He had been a heavyweight prizefighter and he was too long for the bed. He lay with his head on two pillows. He did not look at Nick.

"I was up at Henry's," Nick said, "and two fellows came in and tied me up and the cook, and they said they were going to kill you."

It sounded silly when he said it. Ole Andreson said nothing.

"They put us out in the kitchen," Nick went on. "They were going to shoot you when you came in to supper."

Ole Andreson looked at the wall and did not say anything.

"George thought I ought to come and tell you about it."

"There isn't anything I can do about it," Ole Andreson said.

SHIRLEY GRIFFITH: Any new book by Hemingway was an important event for readers. But stories like "The Killers" shocked many people. Some thought there was too much violence in his stories. Others said he only wrote about gunmen, soldiers, fighters and drinkers.

This kind of criticism made Hemingway angry. He felt that writers should not be judged by those who could not write a story.

DOUG JOHNSON: Hemingway was happy in Key West. In the morning he wrote, in the afternoon he fished, and at night he went to a public house and drank. One old fisherman said: "Hemingway was a man who talked slowly and very carefully. He asked a lot of questions. And he always wanted to get his information exactly right."

Hemingway and his wife Pauline had a child in Key West. Soon afterward he heard that his father had killed himself. Hemingway was shocked. He said: "My father taught me so much. He was the only one I really cared about."

When Hemingway returned to work there was a sadness about his writing that was not there before.

His new book told about an American soldier who served with the Italian army during World War One. He meets an English nurse and they fall in love. They flee from the army, but she dies during childbirth. Some of the events are taken from Hemingway's service in Italy. The book is called "A Farewell to Arms."

Part of the book talks about the defeat of the Italian army at a place called Caporetto. STORYTELLER: "At noon we were stuck in a muddy road about as nearly as we could figure, ten kilometres from Udine. The rain had stopped during the forenoon and three times we had heard planes coming, seen them pass overhead, watched them go far to the left and heard them bombing on the main highroad. . . .

"Later we were on a road that led to a river. There was a long line of abandoned trucks and carts on a road leading up to a bridge. No one was in sight. The river was high and the bridge had been blown up in the center; the stone arch was fallen into the river and the brown water was going over it. We went up the bank looking for a place to cross. . . . We did not see any troops; only abandoned trucks and stores. Along the river bank was nothing and no one but the wet brush and muddy ground."

SHIRLEY GRIFFITH: "A Farewell to Arms" was very successful. It earned Hemingway a great deal of money. And it permitted him to travel. One place he visited was Spain, a country that he loved. He said: "I want to paint with words all the sights and sounds and smells of Spain. And if I can write any of it down truly, then it will represent all of Spain."

A book called "Death in the Afternoon" was the result. It describes the Spanish tradition of bull fighting. Hemingway believed that bull fighting was an art, just as much as writing was an art. And he believed it was a true test of a man's bravery, something that always concerned him.

DOUG JOHNSON: Hemingway also traveled to Africa. He had been asked to write a series of reports about African hunting. He said: "Hunting in Africa is the kind of hunting I like. No riding in cars, just simple walking and feeling the grass under my feet."

The trip to Africa resulted in a book called "The Green Hills of Africa" and a number of stories. One story is among Hemingway's best. He said a writer saves some stories to write when he knows enough to write them well.

The story is called "The Snows of Kilimanjaro." It tells of Hemingway's fears about himself. It is about a writer who betrays his art for money and is unable to remain true to himself.

SHIRLEY GRIFFITH: In nineteen thirty-six, the Civil War in Spain gave him a chance to return to Spain and test his bravery again. He agreed to write about the war for an American news organization.

It was a dangerous job. One day, Hemingway and two other reporters were driving a car near a battlefield. The car carried two white flags. But rebel gunners thought the car was carrying enemy officers. Hemingway was almost killed. He said: "Shells are all the same. If they do not hit you, there is no story. If they do hit you, then you do not have to write it."

Hemingway's first book of stories was called "In Our Time."

The trip to Spain resulted in two works, a play called "The Fifth Column" and the novel "For Whom the Bell Tolls." The novel tells the story of an American who has chosen to fight against the fascists. He realizes that there are lies and injustice on his side, as well as the other. But he sees no hope except the victory of his side. During the fighting, he escapes his fear of death and of being alone. He finds that "he can live as full a life in seventy hours as in seventy years."

The book was a great success. Hemingway enjoyed being famous. His second marriage was ending. He divorced Pauline and married reporter Martha Gellhorn. He had met Martha while they were working in Spain. They decided to live in Cuba, near the city of Havana. Their house looked out over the Caribbean Sea.

But this marriage did not last long. Hemingway was changing. He began to feel that whatever he said was right. Martha went on long trips to be away from him. He drank heavily to forget his loneliness.

DOUG JOHNSON: When America entered World War Two, Hemingway went to Britain as a reporter. Later he took part in the invasion of Europe and the freeing of Paris.

During the war Hemingway met another reporter, Mary Walsh. In nineteen forty-five, when his marriage to Martha was legally over, he married Mary.

After the war, Hemingway began work on his last important book, "The Old Man and the Sea." It is the story of a Cuban fisherman who refuses to be defeated by nature.

Hemingway said: "I was trying to show the experience of the fisherman so exactly and directly that it became part of the reader's experience."

In nineteen fifty-four, Hemingway won the Nobel Prize for literature. But he was too sick to take part in the ceremony.

SHIRLEY GRIFFITH: Ernest Hemingway was sixty years old, but he said he felt like he was eighty-six. And, even worse, he felt that he no longer was able to write. He seemed to be living the story about the writer who had sold his writing skill in order to make money.

In nineteen sixty-one Ernest Hemingway killed himself. Among the papers he left was one that described what he liked best:

SHIRLEY GRIFFITH: And I'm Shirley Griffith. Join us again next week for another People in America program in Special English on the Voice of America.