Europe and the Debt Crisis in Greece

Update Required To play the media you will need to either update your browser to a recent version or update your Flash plugin.
By VOA
2011-11-4 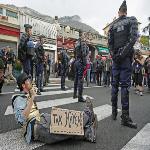 Photo: Reuters
An anti-G20 demonstrator at the France-Monaco border on Thursday

For months, people around the world have watched the strikes and violent protests in Athens. But Greeks in rural areas say the country's debt crisis is hitting them even harder. And they say the government is ignoring their problems.

In the West Macedonian town of Ptolemaida, electricity is the main industry. Mines in the area supply lignite or "brown coal" for power. The electric company in the town is owned by the state. But the government plans to sell off many of its state-owned utilities to help pay Greece's debts.

In the nearby town of Kozani, Lefteris Ionnadis helps lead an activist group called the Independent Kozani Movement.

LEFTERIS IOANNIDIS: "Our economy has depended on the coal industry for years. Most people living here were employed in the mines, and other industries were neglected. Private businesses have been struggling for decades, and rural economies have taken a big hit."

The area is one of the poorest in Europe. It has the highest unemployment rate in Greece, at seventeen percent. And it gets a lot of aid from the European Union.

People in Kozani say they are worried about the future.

MAN: "It's getting really bad here. There are no jobs around. Everything is just rotten really."

WOMAN: "I'm a student. I am absolutely sure I will not be employed once I'm done with my studies. I am also pretty sure I will never get a pension in my life. So at the moment we are just waiting for some gift from God."

Lazaros Maloutas is the mayor of Kozani. He says government cuts will end up hurting the Greek economy.

LAZAROS MALOUTAS: "5.5 billion euros are being cut from the real economy, of what is a fairly small country," he says. "If we stick only to such austerity measures, the country will plunge deeper and deeper into recession. We need investment."

Leaders of the world's biggest economies held two days of talks late this week in Cannes, France. French President Nicolas Sarkozy hosted the Group of 20 meeting to discuss ways to strengthen the world economy. But the Greek political crisis became a top issue.

Earlier this week, Prime Minister George Papandreou made a surprise call for a nationwide vote on the European Union's latest financial rescue plan. The EU had reached agreement on the plan just days earlier. The plan would reduce Greece's debt by nearly a half if the government approves big spending cuts.

On Thursday, Mr. Papandreou withdrew his proposal to let voters decide whether to approve the EU plan. Mr. Sarkozy and German Chancellor Angela Merkel had pressured him to drop the idea.

Mr. Sarkozy says Europe's two biggest economies had a duty to intervene to defend the seventeen nations that use the euro.

Protesters came from around the world to demonstrate near the G20 meeting on the French Riviera. Eran Hakim flew in from Israel. He blamed the leaders for the growing inequalities in the world.

ERAN HAKIM: "We see inequality going higher and higher inside countries and between countries. They are managing it, they're responsible. I do not think they will change it, but I am saying that we want it to be changed."

Nellini Stamp took time from the Occupy Wall Street protests in New York to join the protest in France.

NELLINI STAMP: "I think it is great because it shows international solidarity, because it is a global economic crisis, so you have to have a global movement, which is happening."