Robert Edison Fulton Rode Around the World on a Motorcycle

Update Required To play the media you will need to either update your browser to a recent version or update your Flash plugin.
By Paul Thompson
2009-1-13

This is Faith Lapidus.

And this is Steve Ember with EXPLORATIONS in VOA Special English. Today we tell about an unusual man who traveled alone around the world. He was an inventor and a filmmaker. He wrote a best-selling book. He was a poet, an artist and an airplane pilot. His name was Robert Edison Fulton, Junior.

He was named for two of America's most famous inventors, Robert Fulton and Thomas Edison.  We begin his story at a dinner party in London, England in nineteen thirty-two.

Robert Edison Fulton, Junior was twenty-four years old. He had graduated from Harvard University in Cambridge, Massachusetts. He had recently completed advanced studies in building design at the University of Vienna in Austria. He was on his way back to the United States when he stopped to visit friends in London.   At a dinner party at his friends' house, a young woman asked him if he would be sailing home soon.

He answered: "No, I am going around the world on a motorcycle."  Robert Fulton would say for the rest of his life that he had no idea why he said such a thing.

Another man at the party said such a trip would be a great idea. And he said he owned the Douglas Motor Works Company. He offered Robert Fulton a new Douglas motorcycle to use on his trip.

Many years later, Mister Fulton said this dinner party was the beginning of an eighteen month adventure. His trip would extend over more than forty thousand kilometers and include twenty-two countries.

Within a few days of the dinner party, Robert Fulton began his preparations. He started collecting maps of the different countries he might visit. In nineteen thirty-two, maps of some countries were difficult to find.

The Douglas company added special equipment to a new motorcycle. This included a second gasoline tank. Mister Fulton would learn that he could ride about five hundred sixty kilometers without needing more fuel.

Two common automobile tires were fitted to the motorcycle. This would make it easier to find new tires or repair the two he had. And the company made a special box to hold tools and a motion picture camera and film. Robert Fulton decided to make a movie about his trip.

A few weeks later, Robert Fulton found himself riding his new motorcycle out of London. He rode to the port of Dover. He crossed the English Channel on a ship.

Robert Fulton said the first part of the trip was not exciting. He had traveled in much of Europe before.

The only new thing was the motorcycle. He quickly rode through France, Germany and Austria. He also passed through Yugoslavia, Bulgaria and Greece. Each time, it took several hours to get permission to cross the border.  Often, border police thought he must be insane. Some said they would permit him to cross, but not his motorcycle. But each time, Mister Fulton was able to talk his way across the border.

Robert Fulton spoke English, French and German.  Soon, these languages did not help him.  But he always seemed to be able to communicate with almost everyone. He was a nice-looking, friendly young man.  People liked him almost immediately.  Many people offered him help when they learned what he was trying to do. Police in small towns often let him sleep in the town jail at night.

In time, he reached Damascus, Syria. His next stop would be Baghdad, Iraq. He quickly learned he would have to cross almost eight hundred kilometers of the great Syrian Desert. Officials told him it would be impossible with a motorcycle. Other people said it could be done.

Robert Fulton decided to find out for himself.  He loaded the motorcycle with extra cans of fuel and water and began his trip across the desert. Syrians called this desert "the Blue." This was because all you could see was the very blue sky and the very hot sun.

He rode sixteen kilometers on the road out of Damascus.  Then he saw a sign showing the way toward Baghdad. It was here that the road ended. In front of him was the great desert. Robert Fulton was alone for most of the trip. He worried about his motorcycle. If the engine failed, he could die of lack of water before anyone could find him. He could fall off and break a leg or arm. The severe heat could kill him.  But the motorcycle did not fail him. He survived the fierce heat. He arrived safely in Baghdad.

Robert Fulton successfully completed his trip.  He traveled through what are now Afghanistan, India, Vietnam, China, Malaysia and Japan. He crossed the Pacific Ocean on a ship, and arrived in San Francisco. From there, he rode his motorcycle home to New York City. He arrived one day before Christmas, nineteen thirty-three.

When he began his trip, Mister Fulton said he wanted to study buildings and monuments because that is what he had studied in school. He later wrote that he became much more interested in the people he met. He said race or religion did not make a difference.  The people were almost always very friendly. He said many people in small villages did not trust him because he was a stranger. But almost everyone tried to help him when they found out that he was riding around the world. 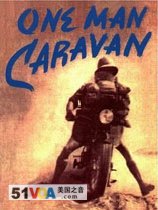 In nineteen thirty-seven, Robert Fulton wrote a book about his trip. He called it "One Man Caravan." It included many photographs of buildings he had seen. Some were very beautiful. They included religious buildings in Malaysia and old military forts in India.

But Robert Fulton liked the photographs of people's faces best. The photos showed people in their native dress, working, playing and examining his motorcycle.

Robert Fulton would be considered an unusual man if this long trip was all he did. It was a dangerous thing to do. Some experts said he was lucky to survive. But the trip was only a small part of his long and interesting life.  Later, he became a professional photographer for Pan American World Airways. He taught himself to be a pilot.

During World War Two, he designed a machine used to train military aircraft crews to fire guns at enemy aircraft. Both the United States Army Air Corps and Navy bought many of these machines.

Another invention earned Robert Fulton a special place in aviation history. He designed and built an airplane that was also a car. It flew like any other aircraft.        But when it landed, the pilot could take off the wings and propeller and drive it like any other car. He called this invention the Airphibian.

In nineteen fifty, Robert Fulton flew his Airphibian to National Airport in Washington, D.C. Then he drove the car from the airport to the headquarters of the Civil Aeronautics Administration. There he was given the legal documents needed to produce the vehicle.

But it was not a success. The costs to develop the Airphibian were too high. Now, the Smithsonian Institution owns the only remaining example of Mister Fulton's unusual invention.

Robert Fulton owned more than seventy legal documents that protected his inventions. Among these was a special wheelchair that helped people enter passenger airplanes. He also invented the Skyhook, an air rescue system that involved an airplane and a large helium balloon.

The Skyhook was an emergency device designed to rescue people in areas that were hard to reach, such as spies in enemy territory. This device was used in the spy movie "Thunderball" about British secret agent James Bond.

Robert Edison Fulton, Junior died at his home in Newtown, Connecticut at the age of ninety-five on May seventh, two thousand-four. He did not own a copy of his flying car. He no longer had many of the inventions he had made. However, he did own a motorcycle. It was the same special motorcycle made by the Douglas Motor Works so many years ago. He had had it rebuilt to look new.

Robert Fulton could never give up his Douglas motorcycle. It was a part of him.

This program was written by Paul Thompson. It was produced by Mario Ritter. This is Steve Ember.

And this is Faith Lapidus. Join us again next week for another EXPLORATIONS program in VOA Special English.