Update Required To play the media you will need to either update your browser to a recent version or update your Flash plugin.
By Dana Demange
2010-5-4 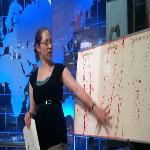 Photo: Dana Demange
A graduate student shows how blood spatters during a workshop at the National Museum of Crime and Punishment

BARBARA KLEIN: And I'm Barbara Klein with EXPLORATIONS in VOA Special English. This year marks the sixtieth anniversary of the United States Federal Bureau of Investigation's "Ten Most Wanted Fugitives" list. This list includes a picture and description of people suspected of crimes so that the public can help provide information leading to their arrest.

The idea was that if the public knew what a criminal looked like, it would be harder for that person to hide. Since its beginnings sixty years ago, four hundred ninety-four criminals have been placed on the "Top Ten List." Four hundred and sixty-three of these criminals have been found. Today we tell about this special list. And we visit a museum in Washington that helps people learn more about crimes and investigations.

STEVE EMBER: The beginning of the "Ten Most Wanted" list dates to nineteen forty-nine. A reporter for United Press International called the FBI and asked them for the names of the "toughest guys" that the agency wanted to capture. The FBI provided the reporter with a list of ten criminals it believed to be the most dangerous.

This list was then published on the front page of the Washington Daily News. The list received wide public attention. And the help of the American public soon led to several arrests. The director of the FBI at the time, J. Edgar Hoover, made the "Ten Most Wanted Fugitives" list a permanent program in nineteen fifty.

BARBARA KLEIN: Over the years, the kinds of criminals on the list have changed. During the nineteen fifties, the "Top Ten" list mostly included escaped prisoners, suspected murderers or people who stole money from banks. During the nineteen sixties, the list included kidnappers, criminals suspected of sabotage and those who stole government property. Today, the list includes people suspected of crimes including terrorism, drug dealing, financial wrongdoing and murder. The most widely known person currently on the list is al-Qaida leader Osama bin Laden.

STEVE EMBER: A suspect must meet two requirements to be on the "Ten Most Wanted Fugitives" list. He or she must be considered a threat to society. And, the FBI must believe that wide publicity about the criminal might help lead to an arrest.

BARBARA KLEIN: The first woman to be on the "Top Ten" list was Ruth Eisemann-Schier. In nineteen sixty-eight she and her boyfriend kidnapped a wealthy young woman in the state of Georgia. After committing the crime, Eisemann-Schier fled the area. She changed her name and moved to the state of Oklahoma.

But she applied for a job that required the prints of her fingertips be taken. An official noted that her fingerprints matched those of a wanted criminal. Eisemann-Schier was arrested. She admitted she was guilty of the crime and was sentenced to seven years in prison. She served four years, then was sent back to her native country of Honduras. So far, eight "Top Ten" suspects have been women.

STEVE EMBER: The FBI has studied how "Top Ten" criminals have been caught over the past twenty years. It says citizen cooperation after publicity about the crime has resulted in the capture of about forty percent of the suspected criminals. The agency says the "Ten Most Wanted Fugitives" program uses many kinds of media to gain public attention. These include newspapers, wanted signs, and television news and crime shows. Of these, the popular television show "America's Most Wanted" is responsible for the largest number of criminals captured.

BARBARA KLEIN: To learn more about crime investigation, we visited the National Museum of Crime and Punishment in Washington. A lawyer and businessman from Florida, John Morgan, owns and operates the museum. He was influenced to open the museum after a visit to Alcatraz prison in San Francisco, California.

Mister Morgan opened the museum in partnership with John Walsh. He is the host of the television show "America's Most Wanted."

Parts of this program are recorded in a studio in the Museum of Crime and Punishment. "America's Most Wanted" tells about people who are suspected of crimes. People watching the show are asked to telephone if they have information that could help capture the criminals.

STEVE EMBER: The Museum of Crime and Punishment has exhibits that explain how experts gather evidence at the place where a crime is committed. Some of the professionals who examine evidence gathered during criminal investigations are called forensic scientists. These experts use chemistry, physics, anthropology, biology and other sciences to study the clues surrounding a crime. This evidence can be used by investigators who are working to solve the crime and as proof in a court of law.

BARBARA KLEIN: When crime scene investigators arrive at the place of a crime, they first try to make sure the area is secure. They must make sure that nothing in the area gets moved or touched. This could weaken or change any evidence. The investigators also document all evidence by taking photographs and drawing pictures of what they see. Then they collect the evidence and carefully document and transport it so that it can be further examined in a laboratory.

STEVE EMBER: What are some of the clues investigators might look for? Fingerprints are one important clue in a crime scene. No two people have the same fingerprints, so they are useful in identifying suspects. Fingerprints are sometimes very easy to see. For example, a murderer might have blood or dirt on his or her hands which leaves prints on the wall. Investigators sometimes use chemicals and special lighting to uncover fingerprints that cannot be seen with the eye alone.

BARBARA KLEIN: The criminal might also leave his or her shoe prints. Experts can discover the manufacturer of the shoe. They can also tell about a person's height and the way he or she walks. A suspect might also leave behind hairs or some kind of body fluid such as blood. DNA testing can then reveal the suspect's identity.

If the crime involves a murder, the body itself holds many clues. Medical examiners can give important information about how the victim died. They study wounds and chemical tests to find out if the victim died accidentally or not. They can tell if a wound was created by the victim or by another person. And, they can discover the time of death to see if it matches information given by suspects and witnesses.

STEVE EMBER: Visitors to the Museum of Crime and Punishment can learn more about blood and its importance in an investigation. They can attend a Crime Scene Investigation workshop. During these events, a trained expert talks to museum visitors and leads an experiment. We attended one that was taught by a graduate student from George Washington University's Forensic Science Department.

LARISSA: "That tail tells you the direction the blood was travelling. So if your tail is pointing that way, which direction was your blood going?"

BARBARA KLEIN: This information can show what kind of weapon was used in a murder. And it can show from what position the murderer killed a victim.

LARISSA: "Now if you look at that bottom picture on your pages, you'll see that you can measure the length and the width of that spatter droplet, right? You can actually calculate the angle at which that blood hit your surface."

For this workshop, Larissa used red paint to show how different murder weapons can leave different patterns of blood. But she says in a real lab, experts would use pig blood to conduct their tests. Pig blood is very close in thickness to human blood. But it is safer for the scientists to use. She also shows how the chemical Luminol can reveal hidden blood stains that the eye alone cannot see.

This workshop shows that it takes a deep understanding of science to lead a crime scene investigation. And, the job requires careful attention to detail, because even the smallest observation can lead to solving a crime.

BARBARA KLEIN: And I'm Barbara Klein. Transcripts, MP3s and podcasts of our programs are at 51voa.com. You can also post comments on our website and on our Facebook page at VOA Learning English. Join us again next week for EXPLORATIONS in VOA Special English.