Exploring the Art of Glass Through History and Around the World

Update Required To play the media you will need to either update your browser to a recent version or update your Flash plugin.
By Dana Demange
2011-7-19 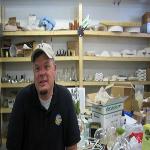 STEVE EMBER: And I'm Steve Ember with EXPLORATIONS in VOA Special English. At the Smithsonian American Art Museum, you can see a large heart-shaped sculpture made of blown glass. The deep red colored heart is topped with a burning flame also made of glass. It is called the "Sacred Heart of Healing" and was made by the artist Tim Tate. How did he make this interesting glass form? Today we answer this question as we explore the art of making glass.

BARBARA KLEIN: Throughout history, people from cultures around the world have been making glass. People first found and used glass made by nature. For example, lightning can create tubes of glass when it strikes sand that has the right combination of minerals. Glass pieces produced by lightning are called fulgurites.

Obsidian is a kind of black glass formed when the heat of a volcano melts the silica material in sand. Ancient cultures broke off pieces of obsidian to make knives and weapons such as arrows. The ancient Aztec civilization in current day Mexico used obsidian for making hunting tools and jewelry. The Aztecs made extremely sharp knives and weapons from obsidian. This is one reason experts say they never developed the use of metal.

STEVE EMBER: Glass is considered a physical state of matter. It may look solid, but it is a liquid as well. This is because glass has the hardness of crystal materials while also having a disordered arrangement of molecules like a liquid.

The chemical quality of glass is what makes up its color. Impurities in glass such as iron can give it a green or brown color. Adding chemicals to the glass can give it different color intensities and effects. For example, adding copper to glass can make it blue, while adding tin can make it white.

BARBARA KLEIN: It is hard to say exactly when humans first started making glass. The Roman historian Pliny said that Phoenician sailors accidentally discovered how to make glass over three thousand years ago. The sailors landed on a beach and started a cooking fire near some containers of the mineral natron. The next day, they realized that the sand and natron under the fire had melted then cooled into glass. Other experts say glass making first started four to five thousand years ago in ancient Mesopotamia, present day Iraq and Syria.

STEVE EMBER: One of the earliest methods developed for making glass containers is called core-forming. A glassmaker places a rounded piece of clay material on the end of a long metal stick. Once the clay dries, the glassmaker dips the form in a container of hot liquid glass until it is covered. The artist can then add a second color of glass to make designs over the first layer of glass. Once the glass form cools completely, it is taken off the metal stick. The clay inside is carefully cut out to form a glass container.

BARBARA KLEIN: Another ancient method of making glass that is still used today is called casting. Casting involves making a clay form in which the shape of the glass container is carved. Then, the artist puts small pieces of glass material inside of the clay form. When it is cooked at a very high temperature, the glass pieces melt and take the shape of the clay form. Once the solid glass object cools, an artist uses special tools to carve an opening in the container.

STEVE EMBER: But it was another method of making glass --the blown glass method-- that changed the glass industry of the ancient world. It was first developed in the Roman Empire about two thousand years ago. This new technology made glass production faster and less costly. A glass container made by casting or core-forming could take a few days to make. With glass blowing, an artist could make many containers in a day.

BARBARA KLEIN: Glassblowing involves gathering hot liquid glass on the end of a metal pipe called a blowpipe. The glass reaches a temperature of about one thousand degrees Celsius. At this temperature, the glass is a bright orange color. The glassblower must turn the pipe constantly so that the thick liquid glass does not fall off the end. He or she then blows through the pipe so that the glass expands into a rounded bubble form. The blown piece of glass can be worked and formed to create many different kinds of shapes. To reshape the glass, it must be continually reheated to stay soft.

STEVE EMBER: In modern terms, the hot oven that the glassblower uses to quickly reheat the glass is called a "glory hole." The artist can shape the hot glass using metal tools such as jacks, tweezers and shears. Or, he or she can place the hot glass on a metal table called a marver to shape the form by rolling it back and forth. Watching an expert glassblower is an exciting experience. The artist moves as quickly and as gracefully as a dancer. 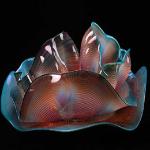 A 1982 work by Dale Chihuly at the Smithsonian American Art Museum.

Murano glass became famous around the world. It is still a center for glass production today. In fact, the Murano glassblowing tradition has been a major influence on one of the most famous American glass artists today, Dale Chihuly. Chihuly trained in Murano in the nineteen sixties. His electrically colorful and fluid glass works can be seen in museums around the world.

STEVE EMBER: The Washington Glass Studio is located near Washington, D.C., in Mount Rainier, Maryland. This is where the artist Tim Tate works and teaches. Here he tells about his "Sacred Heart of Healing" sculpture that we talked about earlier.

TIM TATE: "My name is Tim Tate and I am a glass sculptor. In the Smithsonian, there is a blown glass heart with a flame coming out of the top. The image in the flame is a hand and off of each fingertip are different natural healing techniques. The first heart I made was when my mother was extremely ill and after she passed away I made the heart larger. For me, it was a memory piece. For years afterwards I made these large sacred hearts. Some of them were clear with things inside, some were very colorful..."

BARBARA KLEIN: Making these hearts is not easy. Tate works with a team of glass artists at a studio in the state of North Carolina. 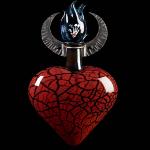 "Sacred Heart of Healing" by Tim Tate is at the Smithsonian American Art Museum.

Tim Tate is also the director of the Washington Glass School. He says he loves teaching glass skills to students because he learns so much from them. And, he likes to work near the other glass artists in the school because they can exchange ideas and methods.

Tate first became interested in glass by watching glassblowers as a young child. As an adult, he developed his love of glass making for very different reasons.

TIM TATE: "When I was just a small kid I went to Corning Glass works and watched the glass blowers there and was really mesmerized by that...And then, years ago when I first found out that I was HIV positive, my initial reason for doing glass was I wanted to leave one glass vase for my nephew and nieces to remember their uncle by. My initial reason was a sense of legacy."

"And then, I kept living and twenty-three years later, I am in many museums around the world... I just got good at it, because I knew I had to hurry because I was supposed to die."

STEVE EMBER: Tim Tate makes glass that is meant to be sculptural. He says the message in his work is usually about healing. 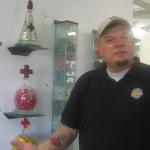 Tim Tate in front of several of his glass artworks

BARBARA KLEIN: Tim Tate also makes sculptures that he calls reliquaries. These works are made of clear blown glass containers with different objects inside. He has a big collection of interesting small objects such as maps, tools, game pieces, and dolls for putting inside the containers.

One reliquary is called "Dice". It is filled with hundreds of small red cubes for playing games of chance. The surface of the container is covered with writing that has been cut into the glass. The message tells about different methods for guessing about the future. It says that good health can sometimes be a matter of luck.

Tim Tate is also working on a series of blown glass sculptures inside of which are small televisions playing videos. In these detailed works, the ancient art of glass meets the modern world of technology.

BARBARA KLEIN: And I'm Barbara Klein. You can learn about other artists on our Web site, 51voa.com. Join us again next week for Explorations in VOA Special English.

This program was originally broadcast in 2007