Update Required To play the media you will need to either update your browser to a recent version or update your Flash plugin.
By Richard Thorman
2010-11-20 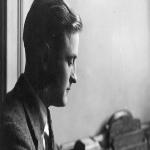 Photo: stpaul.lib.mn.us
F. Scott Fitzgerald experienced the wild living of the period, yet wrote about its effect on people as though he were just an observer.

STEVE EMBER: And I'm Steve Ember with the Special English program PEOPLE IN AMERICA. Every week we tell about someone important in the history of the United States. Today we tell about writer F. Scott Fitzgerald.

SHIRLEY GRIFFITH: Early in nineteen twenty, the American writer F. Scott Fitzgerald was poor and unknown. He was twenty-four years old. The girl he wanted to marry had rejected him. Her family said he could not support her.

Later that same year, Fitzgerald's first novel, "This Side of Paradise," was accepted for publication. He said that when the news arrived in the mail: "I left my job. I paid my debts, bought a suit of clothes and woke in the morning to a world of promise."

Yet by the time F. Scott Fitzgerald died in nineteen forty, at the age of forty-four, his money was gone, and so was his fame. Most people could not believe that he had not died years before.

The problem was that he was so much a part of the age he described, the "Roaring Twenties." So when the period ended people thought he must have ended with it.

STEVE EMBER: The nineteen twenties began with high hopes. World War One, the "War to End All Wars," was over. The twenties ended with a huge drop in stock market prices that began the Great Depression. Fitzgerald was a representative of the years of fast living in between.

The nation's values had changed. Many Americans were concerned mainly with having a good time. People broke the law by drinking alcohol. They danced to jazz music. Women wore short skirts.

Money differences between one group of Americans and another had become sharper at the beginning of the twentieth century.

By the nineteen twenties, many people believed that gaining the material things one desired could bring happiness. F. Scott Fitzgerald wrote about the lives of people who lived as if that were true.

Of his own time, he said: "There seemed no question about what was going to happen. America was going on the greatest party in its history and there was going to be plenty to tell about." Yet if he described only the party, his writings would have been forgotten when the party ended.

"All the stories that came into my head," he said, "had a touch of unhappiness in them. The lovely young women in my stories were ruined; the diamond mountains exploded. In life these things had not happened yet. But I was sure that living was not the careless business that people thought. "

Fitzgerald was able to experience the wild living of the period yet write about its effect on people as though he were just an observer. That is a major reason his writings still are popular.

STEVE EMBER: Francis Scott Key Fitzgerald was born in the middle western city of Saint Paul, Minnesota. He grew up there. In his mother's family there were southern landowners and politicians. The member of the family for whom he was named had written the words to "The Star-Spangled Banner," America's national song.

His father was a businessman who did not do well. Scott went to free public schools and, when he was fifteen, a costly private school where he learned how the rich lived.
When F. Scott Fitzgerald was seventeen, he entered Princeton University.

SHIRLEY GRIFFITH: Fitzgerald was not a good student. He spent more time writing for school plays and magazines at Princeton than studying. His poor record troubled him less than the fact that he was not a good enough athlete to be on the university's football team.

University officials warned him he had to do better in his studies or he would be expelled. So he decided to leave the university after three years to join the United States Army. It was World War One, but the war ended before he saw active duty.

He met his future wife while he was at one of the bases where he trained. The girl, Zelda Sayre, was a local beauty in the southern city of Montgomery, Alabama. She and Fitzgerald agreed to marry. Then she rejected him when her family said that Fitzgerald could not give her the life she expected.

STEVE EMBER: Fitzgerald was crushed. He went to New York City in nineteen nineteen with two goals. One was to make a lot of money. The other was to win the girl he loved.

He rewrote and completed a novel that he had started in college. The book, "This Side of Paradise," was published in nineteen twenty. It was an immediate success.

At twenty-four, Fitzgerald was famous and rich. A week after the novel appeared, Scott and Zelda were married. F. Scott Fitzgerald had gained the two goals he had set for himself.
At this point the fairy tale should end with the expression: "They lived happily ever after." But that was not to be the ending for the Fitzgeralds.

SHIRLEY GRIFFITH: Fitzgerald is reported to have said to his friend, the American writer Ernest Hemingway: "The very rich are different from you and me." Hemingway is reported to have answered: "Yes, they have more money." The exchange tells a great deal about each writer. Hemingway saw a democratic world where people were measured by their ability, not by what they owned.

Fitzgerald saw the deep differences between groups of people that money creates. He decided to be among the rich.

To do this he sold short stories to magazines and, when he had time, continued to write novels. He also continued to live as though his life was one long party.

For several years he was successful at everything. Editors paid more for a story by Fitzgerald than by any other writer. And he sold everything he wrote. Some stories were very good. He wrote very fast, though. So some stories were bad. Even the bad ones, however, had a spirit and a life that belonged to Fitzgerald. As soon as he had enough good stories, he collected them in a book.

STEVE EMBER: Fitzgerald quickly learned that a life of partying all the time did not help him write his best. But he could not give up the fun.

Scott and Zelda lived in New York City. He drank too much. She spent too much money. He promised himself to live a less costly life. Always, however, he spent more than he earned from writing.

SHIRLEY GRIFFITH: The novel was well received, but it was nothing like the success of his first novel.

Fitzgerald was unhappy with the critics and unhappy with the money the book earned. He and his wife moved to France with their baby daughter. They made many friends among the Americans who had fled to Paris. But they failed to cut their living costs. Fitzgerald was always in debt. He owed money to his publisher and the man who helped to sell his writings. In his stories he says repeatedly that no one can have everything. He seemed to try, though. It looked for a brief time like he might succeed.

STEVE EMBER: Fitzgerald continued to be affected by the problems that would finally kill him -- the drinking and the debts. Yet by nineteen twenty-five his best novel, "The Great Gatsby," was published.

It is the story of a young man's search for his idea of love. It also is a story of what the young man must do to win that love before he discovers that it is not worth having.
Next week we shall discuss this important novel. And we shall tell you about the rest of Fitzgerald's short life.

SHIRLEY GRIFFITH: This PEOPLE IN AMERICA program was written by Richard Thorman and produced by Lawan Davis. I'm Shirley Griffith.

STEVE EMBER: And I'm Steve Ember. Join us again next week as we conclude the story of the life of writer F. Scott Fitzgerald in Special English on the Voice of America.