Farming in the City: The Joys of Growing Food

Update Required To play the media you will need to either update your browser to a recent version or update your Flash plugin.
By Ann Dornfeld
2010-7-5 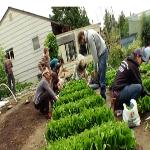 Photo: alleycatacres.com
At work in an Alleycat Acres garden

For many years, people in American cities have depended on farmers in rural areas to grow fruits and vegetables. But now a new generation of farmers is planting crops in urban areas.

Sean Conroe is a college student. Amber Banks is a teacher. They both grew up farming and gardening. Sean Conroe and Amber Banks wanted to start a farm in the middle of Seattle, Washington.

AMBER BANKS: "There are a lot of neighborhoods that don't have access to healthy, fresh produce. And if they do, it can be very expensive. So we see unused space as a great place to grow food that will make it more accessible for people."

Sean Conroe created a website to get volunteers and donations. Within a week, they were offered a plot of land between two houses. He says twenty volunteers worked for six weekends to turn the grassy land into a farm. They call their project Alleycat Acres.

SEAN CONROE: "We have spinach, onions, radish, lettuce and chard that's all ready to be harvested right now."

There are also carrots, green onions, peas, beans and turnips.

SEAN CONROE: "Broccoli, tomatillos and cucumbers which are all starting to pop up. And then strawberries."

The Alleycats have harvested about ninety kilograms of produce so far. They have donated most of it to local food banks that feed hungry people in Seattle.

Bridget Barni is sitting in the dirt picking lettuce. She is one of eighty people who are volunteering at this urban farm. Like a lot of the volunteers, she does not have much gardening experience.

One of the goals of the urban farm is to show city people the joys of growing food. The Alleycats invite school groups to the farm to help out. And Amber Banks says they want the same people who get food donations to learn how to work the soil.

Sean Conroe says Alleycat Acres is expanding to other empty areas of Seattle. So are a lot of other urban farming groups.

SEAN CONROE: "We'd like to expand as much as we can where there are empty lots that have ample amounts of sunlight, that have access to water and that have a community rallying around projects such as this."

Seattle has declared two thousand ten "The Year of Urban Agriculture." But the growth of these farms is limited. That is because Seattle, like a lot of other cities, has restrictions on urban farms. The City Council is now considering changing those laws.

And that's the VOA Special English Agriculture Report, by Ann Dornfeld. Support came from the Park Foundation, the Gaylord and Dorothy Donnelly Foundation and the Great Lakes Fishery Trust. You can find more stories -- and post your comments -- at environmentreport.org. You can also follow us on Facebook and Twitter at VOA Learning English. I'm Bob Doughty.