Fight to End Rinderpest Is Declared a Success

Update Required To play the media you will need to either update your browser to a recent version or update your Flash plugin.
By VOA
2010-11-1 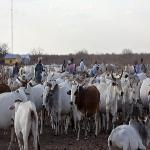 In nineteen ninety-four, animal health experts started a worldwide campaign to end rinderpest. This disease is closely related to the measles virus but it does not infect people. Yet for thousands of years rinderpest has affected people by killing cattle and other animals and causing starvation.

The last known outbreak of rinderpest took place in Kenya in two thousand one.

Now the World Organization for Animal Health is declaring victory against this much-feared sickness. Official confirmation is not expected until May, when the organization will have reports from the last few countries.

But the United Nations Food and Agriculture Organization has announced it is ending field operations against riderpest. Jacques Diouf is head of the FAO.

JACQUES DIOUF: "Rinderpest affected Africa, Asia and Europe for millennia and caused widespread famine and decimated millions of animals, both domestic and wild."

Experts believe rinderpest first came from Asia. The name means "cattle plague" in German. The disease was common in Europe until the nineteenth century.

In Africa in the eighteen hundreds, rinderpest killed eight out of ten infected cattle. Whole herds died, leaving people without meat or milk and damaging economies.

Rinderpest can spread quickly through the air and in water containing waste from animals with the virus. The disease was deadly in eighty to ninety percent of cases. It mainly sickened cattle and buffalo, but also other animals including giraffes, yaks and antelope.

Some areas of the world escaped rinderpest. This was probably because of careful efforts to prevent the import of sick animals.

In nineteen ninety-nine, Walter Plowright won the World Food Prize as a hero of the fight against rinderpest. The British researcher fought the disease in Africa in the nineteen fifties and sixties.

He led the development of a vaccine called TCRV. A single dose of it could protect animals against rinderpest. Food production increased.

Now, rinderpest expert John Anderson calls the end of the disease "the biggest achievement in veterinary history" Officials say they must still decide where to keep some of the virus and infected tissue for future research. Rinderpest is only the second disease ever declared to have been eliminated. The other disease is smallpox.

And that's the VOA Special English Agriculture Report. You can read and download our programs at 51voa.com. I'm Bob Doughty.