Update Required To play the media you will need to either update your browser to a recent version or update your Flash plugin.
By Chris Cruise and Caty Weaver
2011-6-23 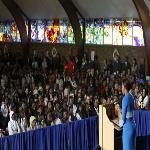 And, we take you to a consumer protection fair in Maryland...

But first we tell about Michelle Obama's visit this week to South Africa.

DOUG JOHNSON: President Obama's wife Michelle is on a week-long trip to South Africa and Botswana. The first lady is traveling with her daughters and her mother. On Wednesday, Mrs. Obama spoke to young people at a church in Soweto. Shirley Griffith has more on her message that day and her visit.

SHIRLEY GRIFFITH: The first lady spoke after a lively musical performance and comments by South African women leaders. Mrs. Obama told the crowd that they were the future of Africa.

The first lady gave this message in a building famed for its part in the movement that ended apartheid -- South Africa's policy of racial separation. Regina Mundi is the largest Roman Catholic Church in the country. Thirty-five years ago, anti-apartheid activists sought refuge in the church to escape violence by police. Crowds also gathered there because South African blacks were barred from attending political meetings in most public places.

Michelle Obama noted that history. She said the anti-apartheid struggle and America's civil rights movement had inspired each other years ago. She said the same could be said on a personal level between herself and the young Africa women of today. She said Africa had a lot to offer the rest of the world because of the continent's high growth rates and growing democracies.

The speech came on the first day of a workshop and conference for women across Africa. The State Department and other American government agencies organized the events. More than seventy young women from twenty-five countries took part. They explored the ideas of leadership and community service. The women were between the ages of sixteen and thirty. They represented the fields of education, health, civil society, business and the media. 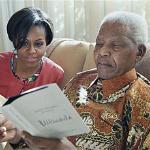 On Tuesday, Michelle Obama and her daughters met with Nelson Mandela, a leader of the anti-apartheid movement. He was also South Africa's first black president. Missus Obama told reporters the experience was "powerful."

DOUG JOHNSON: Consumer protection is a big issue in the United States. But there is disagreement about what the government should be doing, if anything, to protect Americans from dishonest businesses and their own bad decisions. Recently, hundreds of people attended a consumer education event in Montgomery County, Maryland. Christopher Cruise has the story.

CHRISTOPHER CRUISE: Congressman Chris Van Hollen organized the consumer education fair. He is part of the Democratic Party leadership in the House of Representatives.

About thirty local, state and federal government agencies were represented at the fair. So were some private agencies that get public money. They were all providing free information. Many of the agencies showed their websites, full of free information designed to protect consumers. Much of the information was in English and Spanish.

Visitors to the consumer fair could learn how to buy a used car, how to select health and life insurance policies and how to save on prescription medicines. They could also learn how to prevent identity theft, how to understand their telephone bill, and even how to choose between competing cable television systems.

State and national officials spoke at the consumer fair. Douglas Gansler is the top government lawyer in Maryland. He says consumers need the government's protection from dishonest businesses.

DOUGLAS GANSLER: "By the very nature of capitalism, it's free-flowing and unregulated. The problem is of course when you have a capitalist society you're going to have people that take advantage of it, and take advantage of people. And there are some insidious people out there that will do these types of things and you have to capture them."

John McCarthy is the elected State's Attorney for Montgomery County. His job is fighting crime. He believes consumer fairs help people protect themselves.

JOHN MCCARTHY: "Public education is our greatest tool - arming people with knowledge about the ways in which common criminal enterprises have tried to take advantage of them."

Mark Calabria was a Deputy Assistant Secretary in the Department of Housing and Urban Development under President George W. Bush. He is now the Director of Financial Regulation Studies at the Cato Institute. He says government officials believe they should spend money educating consumers and providing classes in what is called "financial literacy." But he says such training did little to keep people from losing money during the recession.

Mister Calabria says there is a danger in government providing so much free consumer information. He fears that consumers will come to believe that the government has made judgments about products or investments. As a result, some people feel little need to do any investigating of their own.

MARK CALABRIA: "You are undermining the incentives for the consumer to make decisions and do their own research...I think we're lulling people into a sense of false safety and at the end of the day I think they're becoming worse off because of it."

You can find links to consumer protection publication and pictures of the Montgomery County consumer fair at 51voa.com.

Clarence Clemons played saxophone in Bruce Springsteen's E Street Band for forty years. His performances in many Springsteen songs were memorable. But Clemons also was a calm and constant spirit in the band. 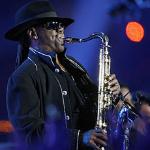 Clarence Clemons during a performance in February of 2009

How the two men first met is now famous. Clemons went to a club where the Springsteen Band was playing. Clemons said the night was rainy and windy. He opened the door, and the wind tore it off from the wall and blew it away. Clemons said the whole band was looking at him in the opening in the wall. He told the group "I want to play with your band." Springsteen was maybe a little shaken by the "Big Man's" exciting entrance. Clemons said the band leader said "Sure, you do anything you want."

That moment was captured in the words to Springsteen's song "Tenth Avenue Freeze Out."

Clarence Clemons was born in the coastal area of Virginia in nineteen forty-two. His musical future began with the surprise Christmas gift of a saxophone when he was nine.

Clemons died at his home in Florida on June eighteenth. He was sixty-nine years old.

Bruce Springsteen said he had lost his great friend and partner. He called the loss "immeasurable." We leave you with the Big Man, Bruce Springsteen and the rest of the E Street Band performing "Born to Run."

I'm Doug Johnson. Our program was written by Chris Cruise and Caty Weaver, who was also the producer. Join us again next week for music and more on AMERICAN MOSAIC in VOA Special English.