Flannery O’Connor, 1925-1964: She Told Stories About People Living in the American South

Update Required To play the media you will need to either update your browser to a recent version or update your Flash plugin.
By Richard Thorman
2010-12-25 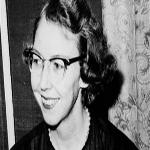 Photo: AP
nor, 1925-1964: She Told Stories About People Living in the American South

SHIRLEY GRIFFITH: Late in her life someone asked the American writer Flannery O'Connor why she wrote. She said, "Because I am good at it."

She was good. Yet, she was not always as good a writer as she became. She improved because she listened to others. She changed her stories. She re-wrote them, then re-wrote them again, always working to improve what she was creating.

Flannery had always wanted to be a writer. After she graduated from Georgia State College for women, she asked to be accepted at a writing program at the State University of Iowa. The head of the school found it difficult to understand her southern speech. He asked her to write what she wanted. Then he asked to see some examples of her work.

He saw immediately that the writing was full of imagination and bright with knowledge, like Flannery O'Connor herself.

Flannery O'Connor grew up in the small southern town of Milledgeville, Georgia.

The year she was born, her father developed a rare disease called lupus. He died of the disease in nineteen forty-one. By that time the family was living in the small southern town of Milledgeville, Georgia, in a house owned by Flannery's mother.

Life in a small town in the American South was what O'Connor knew best. Yet she said, "If you know who you are, you can go anywhere."

SHIRLEY GRIFFITH: Many people in the town of Milledgeville thought she was different from other girls. She was kind to everyone, but she seemed to stand to one side of what was happening, as if she wanted to see it better. Her mother was her example. Her mother said, "I was brought up to be nice to everyone and not to tell my business to anyone."

Flannery also did not talk about herself. But in her writing a silent and distant anger explodes from the quiet surface of her stories. Some see her as a Roman Catholic religious writer. They see her anger as the search to save her moral being through her belief in Jesus Christ. Others do not deny her Roman Catholic religious beliefs. Yet they see her not writing about things, but presenting the things themselves.

RAY FREEMAN: When she left the writing program at Iowa State University she was invited to join a group of writers at the Yaddo writers' colony. Yaddo is at Saratoga Springs in New York state. It provides a small group of writers with a home and a place to work for a short time.

The following year, nineteen forty-nine, she moved to New York City. She soon left the city and lived with her friend Robert Fitzgerald and his family in the northeastern state of Connecticut. Fitzgerald says O'Connor needed to be alone to work during the day. And she needed her friends to talk to when her work was done.

SHIRLEY GRIFFITH: While writing her first novel, "Wise Blood", she was stricken with the disease lupus that had killed her father. The treatment for lupus weakened her. She moved back to Georgia and lived the rest of her life with her mother on a farm outside Milledgeville. O'Connor was still able to write, travel, and give speeches.

"Wise Blood" appeared in nineteen fifty-two. Both it and O'Connor's second novel, "The Violent Bear it Away," are about a young man growing up. In both books the young men are unwilling to accept the work they were most fit to do.

Like all of Flannery O'Connor's writing, the book is filled with humor, even when her meaning is serious. It shows the mix of a traditional world with a modern world. It also shows a battle of ideas expressed in the simple, country talk that O'Connor knew very well.

RAY FREEMAN: In "Wise Blood", a young man, Hazel Motes, leaves the Army but finds his home town empty. He flees to a city, looking for "a place to be." On the train, he announces that he does not believe in Jesus Christ. He says, "I wouldn't even if he existed. Even if he was on this train."

Many people in the town of Milledgeville thought she was different from other girls.

His moving to the city is an attempt to move away from the natural world and become a thing, a machine. He decides that all he can know is what he can touch and see.

In the end, however, he destroys his physical sight so that he may truly see, because he says that when he had eyes he was blind. Critics say his action seems to show that he is no longer willing to deny the existence of Jesus but now is willing to follow him into the dark.

The novel received high praise from critics. It did not become popular with the public, however.

SHIRLEY GRIFFITH: O'Connor's second novel, "The Violent Bear it Away," was published in nineteen sixty. Like "Wise Blood," it is a story about a young man learning to deal with life.

The book opens with the young man, Francis Marion Tarwater, refusing to do the two things his grandfather had ordered him to do. These are to bury the old man deep in the ground, and to bring religion to his uncle's mentally sick child.

Instead, Tarwater burns the house where his grandfather died and lets the mentally sick child drown during a religious ceremony.

RAY FREEMAN: Critics say Tarwater's violence comes from his attempt to find truth by denying religion. In the end, however, he accepts that he has been touched by a deeper force, the force of the word of God, and he must accept that word.

Both of O'Connor's novels explore the long moment of fear when a young man must choose between the difficulties of growing up and the safe world of a child.

SHIRLEY GRIFFITH: Flannery O'Connor is at least as well known for her stories as for her novels. Her first book of stories, "A Good Man is Hard to Find," appeared in nineteen fifty-five. In it she deals with many of the ideas she wrote about in "Wise Blood," such as the search for Jesus Christ.

RAY FREEMAN: The woman who owns the farm offers to let him marry her deaf daughter. He finally agrees when the mother gives him the farm, her car, and seventeen dollars for the wedding trip. He says, "Lady, a man is divided into two parts, body and spirit. . . The body, lady, is like a house: it don't go anywhere; but the spirit, lady, is like a automobile, always on the move. . . "

We learn that when the one-armed man was a child, his mother left him. Critics say that when he helps the boy, he is helping himself.

Near the end of her life she said, "I'm a born Catholic, and death has always been brother to my imagination."

RAY FREEMAN: The next year, in nineteen sixty-five, her final collection of stories, "Everything That Rises Must Converge," appeared. In it she speaks of the cruelty of disease and the deeper cruelty that exists between parents and children. In these stories, grown children are in a struggle with parents they neither love nor leave. Many of the children feel guilty about hating the mothers who, the children feel, have destroyed them through love. The children want to rebel violently, but they fear losing their mothers' protection.

In nineteen seventy-one, O'Connor's "Collected Stories" was published. The book contains most of what she wrote. It has all the stories of her earlier collections. It also has early versions of both novels that were first published as stories. And it has parts of an uncompleted novel and an unpublished story.

In nineteen seventy-two this last book won the American book industry's highest prize, The National Book Award. As one critic noted, Flannery O'Connor did not live long, but she lived deeply, and wrote beautifully.

RAY FREEMAN: And I'm Ray Freeman. Join us again next week for another People in America program on the Voice of America.