Update Required To play the media you will need to either update your browser to a recent version or update your Flash plugin.
By Christopher Cruise and Caty Weaver
2011-12-8 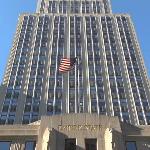 We also answer a question from China about the state of Alaska ...

But first, another question -- could a historic piece of New York City be up for sale soon?

DOUG JOHNSON: Americans like to joke about the Brooklyn Bridge in New York City. They use the expression "selling the Brooklyn Bridge" to describe a person who wants to trick someone else. Individuals have, in fact, offered to sell the publicly owned structure to trusting buyers. But it is not for sale.

But, over the years, we have never heard about someone selling New York's Empire State Building -- until now. Christopher Cruise explains.

CHRISTOPHER CRUISE: The Empire State Building was the tallest structure in the world for more than forty years. Work on the building was finished in nineteen thirty-one. While it is no longer the tallest, it is probably the most famous. People from around the world visit its eighty-sixth floor observatory to see New York from high above.

Ten years ago, the Malkin family bought the Empire State Building for more than fifty-seven million dollars. Now, the family is considering selling shares in a publicly traded company that would operate buildings in New York and the state of Connecticut.

Teresa Martin set up the Real Estate Investment Association in New York. She wonders why the Malkin family is considering selling shares in the buildings.

TERESA MARTIN: "It may be that they may be in trouble and need to raise some funds. But it may just mean that they want to expand and need investor dollars to actually, you know, do what they foresee in their vision to do."

Some people with offices in the Empire State Building say they are not happy with its restrooms and elevator equipment. The Malkin family has spent at least five hundred fifty million dollars making changes to the building, including replacing more than six thousand five hundred windows.

The cost of office space has more than doubled. The New York Times newspaper says the number of occupants has been dropped from nine hundred fifty in two thousand two to about two hundred now. But those leasing space in the building now have much larger offices.

Teresa Martin plans to buy shares in the Empire State Building. But she does not plan to put all of her money into the investment.

TERESA MARTIN: "If you're telling me that I can get it for ten dollars a share, let's say, would I get a hundred shares? Yeah. Would I get like two hundred thousand? Probably not. But I would get a piece."

The one-hundred-two-story building is often lit up at night in honor of different causes or events. The New York Times spoke with someone who knows about the plan to sell shares in the real estate company. The person said the building would be lit up in green lights – the color of American money – if the plan to sell shares comes to pass. More details are expected early next year.

The United States bought Alaska from Russia in eighteen sixty-seven for seven million dollars. That is less than five cents a hectare.

At the time, many Americans criticized the purchase. But it was one of the best deals the country ever made. Alaska proved rich in oil and minerals. Part of the Arctic National Wildlife Refuge in Alaska

Gold was found nearby in the Yukon area of Canada in the eighteen nineties. Thousands of people traveled to the Yukon through Alaska hoping to get rich. Most never did. But some of them decided to stay in Alaska. Mainly they earned their money as miners, fishermen, animal trappers and store owners.

Alaska became an official territory of the United States in nineteen twelve. Four years later, the first Alaskan statehood bill was proposed in Congress. Opponents argued that Alaska was far away, disconnected from the other states and little populated. Only about fifty-eight thousand people lived there at the time.

Yet those were not the only concerns. Historians say Congress was also unsure about the loyalties of native Alaskans -- the Aleuts, Indians and Eskimos. But during World War Two, national leaders recognized the importance of the territory to security in the Pacific.

The United States entered the war in nineteen forty-one after Japanese planes attacked the Navy base at Pearl Harbor, Hawaii. The surprise attack sank many ships. After that, Congress provided billions of dollars in defense spending for Alaska. Today, federal spending is one of the most important parts of the state economy.

After the war, Alaskans were more serious than ever about statehood. They formed a Statehood Committee in nineteen forty-nine to work toward that goal.

DOUG JOHNSON: The Canadian band Nickelback is a band critics love to hate. But the four-man, hard rock group is still a big success. Their new album, "Here and Now," came out late last month. Barbara Klein has some of the songs. Nickelback songs are mainly about two subjects: sex and drinking. This album, however, also includes the song, "When We Stand Together." It tells about war and society's reaction to it:

And then the song calls for change. It says that everybody wins when people stand together, hand in hand.

"When We Stand Together" is one of the first two singles released by "Nickelback." The other is a drinking song, "Bottoms Up."

Some people might find the songs offensive. But the band does offer a love song or two. "Trying Not to Love You," tells the sad story of someone whose love is not returned. You hear the following words again and again:

And finally the singer expresses this sad conclusion:

Cause trying not to love you,
Only makes me love you more

Nickelback seems to take criticism well. Recently, tens of thousands of people in Michigan signed a proposal to keep the band from performing at a Detroit Lions football game. Nickelback members answered by making fun of themselves in a video for a humorous web series, "Funny or Die." That is the kind of cool that comes with selling more than fifty million albums.

We leave you with Nickelback performing "Lullaby" from their new album, "Here and Now."

DOUG JOHNSON: I'm Doug Johnson. Our program was written by Christopher Cruise and Caty Weaver, who was also our producer. And Mario Ritter was our reader.

Clarification: Some references in this story might have suggested that the Empire State Building might be put on the market for sale. As the story correctly explains, the building might be turned into a publicly traded real estate company in which shares would be sold.