For Some, Free Citizenship Classes; For Others, a Dream Delayed Again

Update Required To play the media you will need to either update your browser to a recent version or update your Flash plugin.
By VOA
2010-9-29 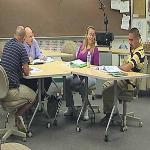 Photo: VOA
Classes like this one teach students English and the history and government of the United States.

Legal immigrants who want to become citizens must learn English and show a knowledge of American history and government. They must also pay a fee and meet other requirements.

Immigrants may take what are called citizenship classes to help them prepare for the naturalization test. Last year, thirteen groups received a total of just over one million dollars from the government to offer these classes.

This year, that support has grown to almost eight million dollars, and the money is going to seventy-five organizations across the country. And now, starting in October, many classes will be offered free of charge.

This will happen through a program supported by United States Citizenship and Immigration Services. Alejandro Mayorkas is the agency's director .

ALEJANDRO MAYORKAS: "We hope to make it an easier transition for people to realize their aspirations of becoming U.S. citizens."

Elsy Ventura from El Salvador enrolled in a one-hundred-dollar class near Washington. She says that is a lot to pay as a single mother also supporting her own mother, who lives with her. But her goal is to become an American.

ELSY VENTURA: "I want to have rights as anybody else in this country."

Other immigrants share that goal. But for some young people, hopes of citizenship were recently blocked in Congress for the fifth time in ten years.

The United States has an estimated eleven million illegal immigrants. About two million of them arrived as children brought by their parents.

A measure known as the Dream Act would put these children of undocumented immigrants on a path toward citizenship instead of possible expulsion. In return, they would have to show "good moral character" and graduate from high school. They would also have to complete two years of college or serve in the military.

UNDOCUMENTED STUDENT: "I grew up in the United States, ever since I was six years old, and it's the custom here and the culture I have grown to love."

"Dream" is short for Development, Relief and Education for Alien Minors. Some conservatives say it could increase illegal border crossings at a time when many Americans want stronger controls.

But the idea gained support among conservatives and liberals, the military and education leaders. Still, the measure died this month in the Senate, where it was tied to a bill to let gays serve openly in the military.

Political observers do not expect Congress to consider the Dream Act again before congressional elections in November. But they do expect supporters to keep trying in the future.