Update Required To play the media you will need to either update your browser to a recent version or update your Flash plugin.
By Mario Ritter
2011-3-3 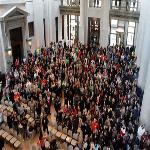 Photo: AP
Protesters in the Ohio Statehouse on Wednesday after the state Senate passed a bill to cut the collective bargaining rights of public employees

State and local governments across the United States are facing big budget deficits. Many of these shortfalls include promises of future retirement payments for public employees.

Several states have had to borrow money for pension plans that have fallen below required funding levels. Pay and benefits for public workers have been a target as state and local governments try to cut spending. At the same time, there are efforts in several states to reduce the negotiating rights of public employees.

In many cases, public employee unions have agreed to accept lower pay. But they oppose efforts to limit collective bargaining. An effort by Republicans to do that in Wisconsin has led protesters to occupy the state capitol building.

Almost every state requires a balanced budget. Yet worries that state and local governments might not be able to repay their debts are now adding to the costs of borrowing. Illinois had to offer a high return of nearly six percent on bonds to be repaid by twenty nineteen.

Experts say, on average, public employees are paid less but have better benefits than workers with similar skills in private jobs. However, they say these differences in labor costs are a lot less than some people think.

Still, traditional pension plans pay a set amount for as long as a retiree lives. States like Georgia, Michigan, Colorado and Ohio are considering a change for future employees. They might offer retirement plans similar to what are called 401(k) plans.

These are a common form of plan offered by private employers. Employers and workers both put money into the plan. Workers can invest the money in areas like stocks or bonds. Their retirement savings are defined by the return on their investments in the plan.

Federal workers already have a savings plan similar to a 401(k).

John McGlennon heads the Government Department at the College of William & Mary in Virginia. He says the economic crisis of two thousand eight continues to affect state and local tax collections. Also, many pension funds have less money because their investments have yet to fully recover from the recession. But Professor McGlennon says things could change.

JOHN McGLENNON: "In terms of the future, states are not necessarily going to be in a rosy condition in the next couple of years. But they do tend to recover much more rapidly than we tend to anticipate."