G-20 Nations Wonder: How Soon Is Too Soon to Cut Spending?

Update Required To play the media you will need to either update your browser to a recent version or update your Flash plugin.
By Mario Ritter
2010-6-24 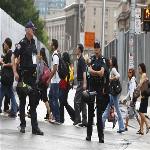 Photo: AP
Police officers stand watch in Toronto on Thursday ahead of the G-20 gathering

This weekend, leaders and top finance officials from the world's twenty biggest economies gather in Toronto, Canada. One of the big issues to discuss is how and when to reduce deficits and economic growth measures as conditions improve.

Chancellor Angela Merkel is defending Germany's decision to cut spending by one hundred billion dollars over four years. But some experts say the world economy is still too weak for Europe's biggest country to reduce spending.

Earlier this year, Germany was slow to react to the Greek debt crisis. European countries later had to agree to a nearly one trillion dollar rescue for the euro area.

Economists also point out that spending cuts alone do not solve the problems of countries with structural economic problems.

G-20 nations are also struggling with financial reform issues. These include new rules for risky financial products and closer supervision of banks.

This week, Britain's finance minister announced a new tax on big banks. Germany and France are considering similar measures to pay for future financial problems. President Obama proposed the idea for the United States in January. But how many countries will join Britain is not clear.

Nineteen countries and the European Union form the Group of 20, including developing economies like Brazil, China, India and Russia. Economist Sebastian Mallaby at the Council on Foreign Relations says G-20 nations should work together on financial reforms.

SEBASTIAN MALLABY: "Financial institutions are cross-border, they are multi-national, they are global. So you ought to have global rules to try and deal with them. But that is not the way the Congress is dealing with them in the United States, and that is not the way I expect European regulators will go either."

G-20 nations also face the issue of trade imbalances, like the one between the United States and China. As recently as last week China said it would not discuss the dispute over its currency at the Toronto summit. But last Saturday China announced it will slowly let the value of the yuan rise. This week, it reached its highest exchange rate in two years.

China's export prices may rise, but an American diplomat said the action "takes an irritant off the table in the U.S.-China relationship."