Gates Says NATO Could Face 'Irrelevance' in the Future

Update Required To play the media you will need to either update your browser to a recent version or update your Flash plugin.
By VOA
2011-6-10 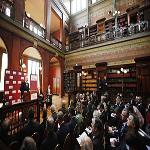 American Defense Secretary Robert Gates has told NATO members that they need to do more -- and spend more -- to support the alliance.

ROBERT GATES: "The blunt reality is that there will be dwindling appetite and patience in the US Congress -- and in the American body politic writ large -- to expend increasingly precious funds on behalf of nations that are apparently unwilling to devote the necessary resources or make the necessary changes to be serious and capable partners in their own defense."

On Friday, Mr. Gates gave his last policy speech before he retires as defense secretary on June thirtieth. He spoke in Brussels, Belgium, at the headquarters of the North Atlantic Treaty Organization. NATO was created in nineteen forty-nine to defend western Europe against the Soviet Union.

Mr. Gates spoke about one current NATO operation -- the bombing campaign in Libya. He noted that all twenty-eight members voted for the mission. But less than half have taken part at all, he said, and fewer than a third have been willing to participate in the campaign. He said many allies want to take part but lack the resources.

Last week NATO decided to extend its activities in Libya until the end of September.

Mr. Gates said that by one estimate, European defense spending has fallen by nearly fifteen percent in the past ten years. He said this has affected what he called the first "hot" ground war in NATO history -- the war in Afghanistan.

ROBERT GATES: "Despite more than two million troops in uniform - not counting the US military - NATO has struggled, at times desperately, to sustain a deployment of twenty-five thousand to forty-five thousand troops, not just in boots on the ground, but in crucial support assets."

Mr. Gates said the American share of NATO defense spending has now risen to more than seventy-five percent. This is happening at a time when budget cuts are being considered in the United States. President Obama has called for an additional four hundred billion dollars in defense reductions. 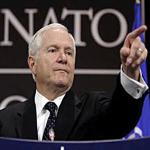 Mr. Gates said nations must be responsible for their fair share of the common defense. He warned about the future of NATO unless Europe stops cutting back on defense spending. He said there is "the very real possibility of collective military irrelevance" for the alliance. He said future American leaders may not consider the return on America's investment in NATO worth the cost.

President Obama's choice to become the next defense secretary is Leon Panetta. Mr. Panetta is currently the director of the Central Intelligence Agency. The CIA job would go to David Petraeus, currently the top American general in Afghanistan, if the Senate approves the nominations.

President Obama wants to begin withdrawing American troops from Afghanistan next month. The goal is to end United States military operations in that country by the end of twenty-fourteen.

On Thursday, the Senate Armed Services Committee held a confirmation hearing for Mr. Panetta. Several senators gave him credit for being the person President Obama named to head the effort that led to the killing of Osama bin Laden. Mr. Panetta said he believed the killing gave the United States the best chance to defeat al-Qaida since the attacks of September eleventh, two thousand one.