Update Required To play the media you will need to either update your browser to a recent version or update your Flash plugin.
By Nancy Steinbach
2012-4-28 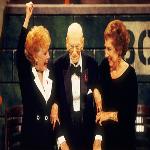 STEVE EMBER: And I'm Steve Ember with the Special English program, PEOPLE IN AMERICA. Every week we tell about a person important in the history of the United States. Today, we tell about the man known as "Mister Broadway," George Abbott.

SHIRLEY GRIFFITH: Experts say probably no one in the history of the American theater influenced it more than George Abbott. He lived to be one hundred-seven years old. He remained active until he died, January thirty-first, nineteen ninety-five.

You can tell the history of the Broadway theater area in New York City by telling the story of George Abbott's life. He wrote plays. He directed them. He produced plays. And he acted in them. He was involved in more than one hundred twenty productions. Some of his most popular shows were musicals. They include "Jumbo," "Pal Joey," "Call Me Madam," "Pajama Game," "Fiorello!" and "Damn Yankees." In some years, he had three hit shows at the same time.

STEVE EMBER: "Damn Yankees" opened in New York in nineteen fifty-five. George Abbott helped write the musical play. And he directed it. It won eight of the Tony awards given each year for the best theater productions on Broadway. In nineteen ninety-four, another performance of "Damn Yankees" opened on Broadway. George Abbott helped with the production. He was one hundred six years old.

"Damn Yankees" is about a baseball player on the Washington Senators baseball team. He sells his soul to the devil so the senators will win the championship.

A major person in the play is a beautiful woman who works for the devil. Her name is Lola. One of the best known songs from that show is "Whatever Lola Wants."

SHIRLEY GRIFFITH: George Francis Abbott was born in eighteen eighty-seven in New York state. His family moved to the western state of Wyoming when he was eleven years old.

George worked as a cowboy during summers before the family moved back to New York State, near the city of Buffalo. He attended the University of Rochester, where he played football and took part in the acting club. He then studied play writing at Harvard University. In nineteen twelve, he won one hundred dollars for a play he wrote called "The Man in the Manhole."

George Abbott moved to New York City in nineteen thirteen. But he had a slow start in the theater. He did not get many acting jobs. Two years later, he became an assistant to a theater producer. Soon he was deeply involved with re-writing plays and producing them. He had his first hit show in nineteen twenty-six. It was called "Broadway. "

STEVE EMBER: George Abbott worked in Hollywood, too. He was involved in producing eleven movies between nineteen twenty-eight and nineteen fifty-eight.

"All Quiet on the Western Front" was one of the most praised. He also produced films of the musical plays "Damn Yankees," "Where's Charley." And "The Pajama Game."

A few weeks before his death, Mister Abbott reportedly was working on a new version of "The Pajama Game." The musical play is about workers in a pajama factory. The clothing workers are planning to strike for more pay. How much more? Seven and a half cents.

SHIRLEY GRIFFITH: Beginning in nineteen twenty, George Abbott had at least one play on Broadway each year. Sometimes there were as many as five.

Mister Abbott liked working with young, unknown actors. He once said a producer was better off if he did not have a star in his show. He said working without a star saves money and damage to the nerves.That is why George Abbott gave acting jobs to actors who were unknown at the time. Many became very famous. Helen Hayes, Gene Kelley, Eddie Albert, Shirley MacLaine, and Carol Burnett are just a few. He also helped unknown song writers, dancers and producers like Harold Prince, Leonard Bernstein, Bob Fosse and Jerome Robbins.

George Abbott changed the American theater in many ways. He was the first to produce musical shows that were serious dramas, not just light love stories. And he was the first producer to use ballet dancers in a musical show. He worked with the ballet expert George Balanchine. That was in nineteen thirty-six. The play was "On Your Toes. " The music was "Slaughter on Tenth Avenue."

STEVE EMBER: George Abbott won just about every award a person can win in the theater. He received a special Tony award for his lifetime of work. He also received the Kennedy Center lifetime achievement award in nineteen eighty-two. And he won Tony awards for four of his musical shows including "Fiorello!"

"Fiorello!" also won the Pulitzer Prize for drama after it opened in nineteen fifty-nine. It is about the life of Fiorello LaGuardia, the mayor of New York City during the nineteen forties. Many critics said the song "Little Tin Box" was the best in the show. It makes fun of the way politicians try to explain their actions when they are accused of spending public money for their own use. Here is "Little Tin Box" from "Fiorello!"

SHIRLEY GRIFFITH: George Abbott earned millions of dollars in the theater. But he did not spend his money freely. He always helped the poor, however. And he quietly provided money to produce shows that no one else would support.

Mister Abbott was married three times. He had a daughter who also worked in the theater. She died in nineteen eighty-four.

STEVE EMBER: George Abbott was always involved in new projects, usually several at one time. But he always took care of his health. He said it was important to eat three meals a day and get enough sleep each night.

He always wore a suit and tie. And he always said what was necessary, not a word more. For Mister Abbott, the play was the most important thing, and nothing was permitted to interfere. Actors and people who went to his plays loved him for it.

When George Abbott celebrated his one hundredth birthday in nineteen eighty-seven, theater actors honored him with a big party. They also performed for him. They ended their show with a song George Abbott especially liked. So we thought we would end with it too. It is called "Heart", from George Abbott's show, "Damn Yankees."

STEVE EMBER: And I'm Steve Ember. Listen again next week for another People in America program on the Voice of America.