Before the G-20 Summit, a Girls 20 Summit in Toronto

Update Required To play the media you will need to either update your browser to a recent version or update your Flash plugin.
By Cecily Hilleary and Jim Randle
2010-6-23 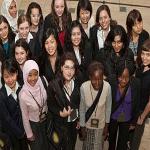 Leaders of the world's twenty largest economies will meet this Saturday and Sunday in Toronto, Canada. The Group of 20 will discuss the best ways to guide the world economy to a stronger recovery. The G-20 is nineteen countries and the European Union.

Last week, in Toronto, international charities held the first-ever Girls 20 Summit. The goal was to bring the economic power of girls and women, and the importance of women's issues, to the attention of G-20 leaders.

Organizers invited twenty young women from each of the G-20 member countries. They discussed the United Nations Millennium Development Goals and better ways to meet them. The goals include cutting poverty, improving access to health care and providing education to all children.

Nineteen-year-old Anwar Basunbul from Saudi Arabia said many Saudi women are interested in working. But they need permission from their husband or other male guardian. And there are restrictions on the professions they can join.

She says the Saudi leadership has not failed women; Saudi women have not yet asked for what they want.

ANWAR BASUNBUL: "I believe women are not confident enough in my country to speak up. So I believe no one is going to come and give you the chance as a guest. You have to go and ask for it."

Irem Tumer was the nineteen-year-old representative from Turkey. She says Turkey has approved many legal reforms as part of its efforts to join the European Union -- but these have not necessarily been put into action. She worries about violence against women.

IREM TUMER: "Especially with the honor killings in the eastern parts. The safety of girls still remains a big problem. There have been laws that have been passed, and many police officers and other authorities are being trained about this. But more widespread awareness and education for all girls is necessary to tackle this issue."

Irem Tumer said she would carry home two messages from the Girls 20 Summit. The first is the need for education. The other is the need to empower women and let them take part in business and political decision-making.

The United Nations estimates that females age ten to twenty-four are one-eighth of the world's population. Many of them are the main providers for their families. Yet, in the developing world, many are unable to enjoy even the most basic human rights.

And that's the VOA Special English Education Report, with reporting by Cecily Hilleary and Jim Randle. You can read, listen and comment on our reports at 51voa.com. We're also on Facebook, Twitter and iTunes at VOA Learning English. I'm Steve Ember.