Update Required To play the media you will need to either update your browser to a recent version or update your Flash plugin.
By VOA
2011-6-30 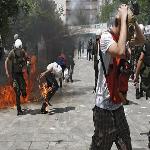 Greece has approved a plan to raise taxes, cut spending and sell government-owned assets. This clears the way for seventeen billion dollars in loans from the International Monetary Fund and the European Union. The loans are a share of the one-hundred-fifty-six-billion-dollar rescue deal that Greece secured last year.

The money will help the government to operate and pay its debts until the middle of September. But the austerity plan led to a national strike on Tuesday and Wednesday, along with violent demonstrations in Athens.

The Greek parliament approved the forty-billion-dollar plan on Wednesday and the details on Thursday. Prime Minister George Papandreou won more support than expected for his proposals. He appealed to parliament to do everything possible to avoid defaulting on the debts of the birthplace of democracy.

Greece is expected to seek more international help, even though years of government borrowing led to the crisis.

Many protesters said their government is making decisions that serve the interests of wealthy nations.

But other Greeks, including this man, see the need for austerity.

MAN: "I think the policies are a good step towards finding common ground with the European Union, which is I think a vision that all Greeks should aspire to. I don't think any country can operate in isolation these days, especially a country the size of Greece."

Dominique Strauss-Khan had to resign in May. He is under house arrest in New York, charged with sexually attacking a hotel maid. He denies the charges.

The international lender has always been led by a European, but Ms. Lagarde will be the first woman.

Ms. Lagarde has promised to be a strong voice for developing countries, especially in Asia and Africa. But international monetary expert Domenico Lombardi says being a European will also help.

DOMENICO LOMBARDI: "And one key factor in guiding this decision is certainly the ability for Christine Lagarde as a European coming from a key euro area country to exert pressure, leverage on her European fellow finance ministers in terms of taking a more aggressive stance on the European crisis."