Update Required To play the media you will need to either update your browser to a recent version or update your Flash plugin.
By Mario Ritter
2010-11-18 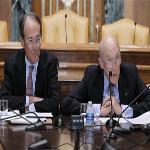 Continuing debt problems in Greece and Portugal. The banking crisis in Ireland. A trillion-dollar deficit in the United States. These are all reasons why high levels of public debt are a big worry around the world.

Countries that keep spending a lot more than they earn may not be able to repay their debts. That risk of default can make it harder and costlier for them to borrow more money. Heavy debt can also affect a country's competitiveness.

Voter anger at government spending and taxes helped lead to the big Republican gains in America's elections this month.

President Obama says for the economy to improve, the government must cut spending and reduce its deficit. In February, he formed the National Commission on Fiscal Responsibility and Reform. The two chairmen are Erskine Bowles, a Democrat, and Alan Simpson, a Republican.

Last week, the chairmen presented their own ideas for how to cut the federal deficit to about two percent of the economy by twenty fifteen. The administration estimates this year's deficit at about ten and a half percent.

The chairmen propose to simplify the tax laws and reduce tax rates. But they also propose to cut some popular tax breaks. One target is deductions for interest paid on home mortgage loans over five hundred thousand dollars.

Another proposal would add two years to the full retirement age for Social Security -- raising it to sixty-nine by about twenty seventy-five.

The commission includes current and former lawmakers from both parties. The group is supposed to reach a compromise acceptable to at least fourteen of the eighteen members by December first.

Other groups are offering their own debt reduction plans. Former senator Pete Domenici and former Clinton administration official Alice Rivlin led a task force that presented its plan on Wednesday.

That plan aims to save six trillion dollars over ten years.?It would freeze federal spending for several years, change the tax laws -- and create a national sales tax.

And that's the VOA Special English Economics Report, written by Mario Ritter. You can download all of our programs, including transcripts, at 51voa.com. I'm Steve Ember.