Update Required To play the media you will need to either update your browser to a recent version or update your Flash plugin.
By VOA
2010-12-31 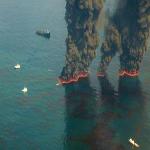 Photo: AFP
A US Coast Guard picture of attempts in May to control oil in the Gulf of Mexico through burning

At the end of each year, the Associated Press releases a list of the top ten news stories of the year. American editors and news directors are asked to vote for what they consider the top stories.

This year, the story with the most votes was the huge oil spill in the Gulf of Mexico. An oil rig operated by BP exploded in April. The explosion killed eleven workers. Close to five million barrels of oil were released into the Gulf until the leak was contained in the middle of July. BP agreed to set aside twenty billion dollars to pay claims and damages to people working in the area's fishing and tourism industries.

The AP says the second most important story was health care reform in the United States. President Obama won a major political victory with congressional passage of his health care reform plan. Among other things, it will extend health care insurance to thirty-two million Americans now without it. But many Republicans in Congress oppose the law and want to cancel parts of it.

The congressional elections in November were another big story. The Republican Party gained a majority in the House of Representatives. But Democrats kept their majority in the Senate.

The American economy was another major story. Economists reported in twenty-ten that the worst recession since the nineteen-thirties had ended. Americans began to spend more as the year ended. But the unemployment rate stayed above nine percent. 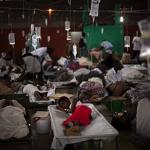 Cholera victims gathered in Cap Haitien, Haiti, in November. Poor conditions after the earthquake in January have helped disease spread

In January, a powerful earthquake struck Haiti. It killed at least two hundred thirty thousand people and left millions of others homeless. Disease and other problems have slowed efforts to rebuild the country.

Another important story was the Tea Party movement in the United States. The Tea Party supports limited government, less federal spending and lower taxes. The movement had a big influence on the Congressional elections.

Another major story was the rescue of thirty-three mine workers in Chile. A partial mine collapse on August fifth trapped them more than half a kilometer underground. They remained trapped for sixty-nine days. Millions of people around the world watched on television as each miner was safely brought to the surface. 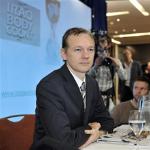 Another major story was the activities of the WikiLeaks website. First the website released thousands of United States military documents about the wars in Iraq and Afghanistan. Then it published thousands of State Department diplomatic cables. They included comments by American diplomats about the lives of world leaders and criticisms of foreign governments.

The tenth story on the AP's list was the war in Afghanistan. President Obama ordered an increase in troops fighting the nearly ten-year-old war. American troops are to begin leaving the country in July. Afghans are to control their own security by the end of twenty fourteen.