What You Can Do About Headaches

Update Required To play the media you will need to either update your browser to a recent version or update your Flash plugin.
By Jerilyn Watson
2012-4-23


BARBARA KLEIN: This is SCIENCE IN THE NEWS in VOA Special English. I'm Barbara Klein.

STEVE EMBER: And I'm Steve Ember. Today we tell about headaches, the pain that strikes almost everyone at some time.

BARBARA KLEIN: Have you had a headache recently? If your answer is yes, you are like many millions of people worldwide who experience pain in the head. The pain can be temporary, mild and cured by a simple painkiller like aspirin. Or, it can be severe.

The National Headache Foundation says more than forty-five million people in the United States suffer chronic headaches. Such a headache causes severe pain that goes away but returns later.

Some headaches may prove difficult and require time to treat. But many experts today are working toward cures or major help for chronic headaches.

STEVE EMBER: The U.S. Headache Consortium is a group with seven member organizations. They are working to improve treatment of one kind of headache -- the migraine. Some people experience this kind of pain as often as two weeks every month. The National Headache Foundation says about seventy percent of migraine sufferers are women. 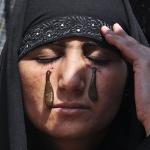 Traditional health workers in Indian-controlled Kashmir use blood-sucking leeches to treat skin diseases and ailments such as arthritis, gout, chronic headaches and sinusitis. The leech therapy follows the traditional unani system of medicine that originated in ancient Greece and is recognized by Indian health officials.
Some people describe the pain as throbbing, causing pressure in the head. Others compare it to someone driving a sharp object into the head. Migraine headaches cause Americans to miss at least one hundred fifty million workdays each year. A migraine can be mild. But it also can be so severe that a person cannot live a normal life.

BARBARA KLEIN: One migraine sufferer is Curtis Croley of Ellicott City in Maryland. He had head pain as a child. Mr. Croley says he does not know what kind of headaches they were. But when he suffered severe headaches as an adult, doctors identified the problem as migraine.

Today, Mr. Croley produces and directs films and videos. He says months can pass without a headache. But then he will have three migraines within a month. If he takes the medicine his doctor ordered early in his headache, it controls the pain in his head. If not, the pain becomes extremely bad. Sometimes he has had to be treated with a combination of drugs in a hospital.

Most migraines react at least partly to existing medicine. And most people can use existing medicine without experiencing bad effects. Doctors sometimes use caffeine to treat migraine headaches. Interestingly, caffeine can also cause some migraines.

BARBARA KLEIN: Medical experts have long recognized the work of the Mayo Clinic in Rochester, Minnesota. The Mayo Clinic says several foods are suspected of being "triggers" that start migraines. They include cheese and alcoholic drinks. Food additives like salt and monosodium glutamate also may be triggers.

The Mayo Clinic tells patients to avoid strong smells that have seemingly started migraines in the past. Some people react badly to products like perfume, even if they have a pleasant smell.

The clinic's experts say aerobic exercise can help migraine sufferers. Aerobic exercise increases a person's heart rate. It can include walking, swimming or riding a bicycle. But a sudden start to hard exercise can cause headaches. So it is a good idea to perform some mild exercises before beginning activities that require more energy.

The experts advise that people should plan to exercise, eat and sleep at the same times each day.

STEVE EMBER: The Mayo Clinic also has advice for women who suffer from migraines. The female body makes estrogen. Drugs like birth control pills contain a version of this chemical. Such drugs may produce headaches or cause them to worsen, the clinic warns. But they can also cause an easing of headache pain. The same is true for estrogen replacement drugs for women. Doctors sometimes order estrogen replacement for women who are no longer able to have children.

BARBARA KLEIN: The Mayo Clinic says there are alternative, or nontraditional, ways to treat migraine. Among them is acupuncture, in which thin needles are placed below the skin at defined areas.

The clinic says another method, biofeedback, is especially effective for migraine. In biofeedback, patients use special equipment to learn how to observe and control physical reactions linked to stress. Some people get help from massage, systematic rubbing of the body. Others use herbs, minerals or vitamins.

BARBARA KLEIN: The Mayo Clinic says the pain may come very early in the day. Other signs can include pain in the neck or the lower part of the head. Scientists are not sure what causes tension headaches. For years, researchers blamed muscle tension from tightening in the face, neck and the skin on top of the head. They believed emotional tension caused these movements. But that belief has been disputed.

The International Headache Society began organizing a system for identifying differing forms of headaches in nineteen eighty-five. The society says there is no evidence that tense muscles are the only cause of pain. So it suggests that tension headaches be called tension-type headaches.

STEVE EMBER: Some scientists now believe that tension headaches may result from changes among brain chemicals such as serotonin. These changes may start sending pain messages to the brain. The changes may interfere with brain activity that suppresses pain.

Whatever the cause of the headache, people do not enjoy the experience. Treatment can be as simple as aspirin or other painkillers. But if your pain is too severe, you will need a doctor's advice.

BARBARA KLEIN: A website called familydoctor.org provides information from the American Academy of Family Physicians. It offers suggestions to ease or end a tension headache.

For example, it says putting heat or ice on your head or neck can help. So can standing under hot water while you are getting washed in the shower. The group also advises exercising often. Another idea is taking a holiday from work. But you had better ask your employer first.

STEVE EMBER: Ask anyone with a cluster headache, and they will tell you that the pain is terrible. The Cleveland Clinic in Ohio says the cluster headache can be many times more intense than a migraine.

Cluster headaches usually strike young people. Smokers and people who drink alcohol often get such headaches. Men are about six times more likely than women to have them. The Cleveland Clinic says this is especially true of younger men. Doctors say cluster headaches often strike during changes of season.

BARBARA KLEIN: The Cleveland Clinic says the cause of cluster headaches is in a brain area known as a trigeminal-autonomic reflex pathway. When the nerve is made active, it starts pain linked to cluster headaches. The nerve starts a process that makes one eye watery and red.

Studies have shown that activation of the trigeminal nerve may come from a part of the brain called the hypothalamus. The Cleveland Clinic says injections of the drug sumatriptan can help. Many other drugs could be used. For example, doctors say breathing oxygen also can help.

Thankfully, modern medicine has ways to treat almost all of our headaches.

BARBARA KLEIN: And I'm Barbara Klein. Visit us at 51voa.com, where you can find transcripts and MP3s of our reports. Join us again next week for more news about science in Special English on the Voice of America.