City Has a Lot Fewer Heart Attacks After Smoking Ban

Update Required To play the media you will need to either update your browser to a recent version or update your Flash plugin.
By Caty Weaver
2009-1-6 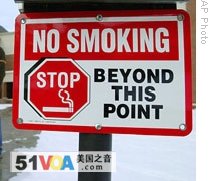 More than twenty of the fifty American states ban smoking in public places. Many other states have partial bans. And many local governments have their own restrictions.

A new study has found the strongest evidence yet that smoke-free laws can reduce a major effect of tobacco -- heart disease.

The study took place in Pueblo, Colorado. In July of two thousand three that city banned smoking in public places and workplaces.

In the year and a half before the ban, hospitals had three hundred ninety-nine admissions for heart attacks. In a similar period starting eighteen months after the ban, the number was two hundred thirty-seven. That was a decrease of forty-one percent.

The study found that heart attack admissions have continued to fall.

The Centers for Disease Control and Prevention published a report on the findings. C.D.C. official Janet Collins says breathing secondhand smoke has immediate harmful effects on a person's heart-and-lung system. Over the long term, secondhand smoke also raises the risk of disease in nonsmokers. Each year in the United States, secondhand smoke kills an estimated forty-six thousand nonsmokers from heart attacks.

The researchers found no considerable change in the number of heart attacks in areas near Pueblo without smoking bans. Doctor Terry Pechacek at the C.D.C. says the findings should persuade every country that smoking in enclosed spaces is very dangerous to nonsmokers.

Adults may think they are protecting children from secondhand smoke when they smoke outside their home or only when the children are not there. But now researchers led by Doctor Jonathan Winickoff at MassGeneral Hospital for Children in Boston are warning about what they call "third-hand smoke."

The researchers did a study of adult beliefs about the possibility of health risks to children from third-hand smoke. People who agreed that environmental smoke was harmful to children's health were more likely to have restrictions on smoking in their homes. The findings appear this month in the journal Pediatrics.

And that's the VOA Special English Health Report, written by Caty Weaver. Transcripts, MP3s and podcasts of our reports are at 51voa.com. I'm Steve Ember.