How Strangers Can Make You Happy

Update Required To play the media you will need to either update your browser to a recent version or update your Flash plugin.
By Brianna Blake
2009-1-20

What makes people happier: money or having happy friends and neighbors? Researchers from Harvard University and the University of California, San Diego, have found an answer as part of a study. 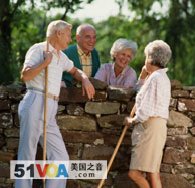 Nicholas Christakis and James Fowler based the study on the emotional health of almost five thousand people. They used information gathered over a period of twenty years, until two thousand three, in the Framingham Heart Study. That study began sixty years ago in Framingham, Massachusetts, to learn more about the risks of heart attack and stroke.

The new study found that friends of happy people had a greater chance of being happy themselves. And the smaller the physical distance between friends, the larger the effect they had on each other's happiness.

For example, a person was twenty percent more likely to feel happy if a friend living within one and a half kilometers was also happy. Having a happy neighbor who lived next door increased an individual's chance of being happy by thirty-four percent. The effects of friends' happiness lasted for up to a year.

The researchers found that happiness really is contagious. Sadness also spread among friends, but not as much as happiness.

Another finding is that people who are married or work together do not have as much of an effect on happiness as friends do.

The findings appeared in the British Medical Journal. The National Institute on Aging in the United States helped pay for the study.

The study is described as the first to demonstrate the indirect spread of happiness. In other words, that your emotions can be affected by someone you do not directly know.

Earlier studies by the two researchers described the effects of social networks on obesity and efforts to stop smoking. The new study shows that happiness spreads through social networks like an emotional virus -- a virus people would be happy to catch.

And that's the VOA Special English Health Report, written by Brianna Blake. Transcripts, MP3s and podcasts of our reports are at 51voa.com. I'm Steve Ember.