Update Required To play the media you will need to either update your browser to a recent version or update your Flash plugin.
By Caty Weaver
2009-6-23

We all know that some people do not seem as emotionally strong as others when life gets difficult. But why is that? A study published in two thousand three in the journal Science offered an answer. 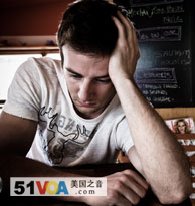 The study followed almost eight hundred fifty people from birth through age twenty-six. Researchers found that those with a short version of a certain gene were more likely to get depressed after a sad or difficult experience.

They found that people with the normal length of the gene were better able to weather life's storms. The gene is a transporter of serotonin, a brain chemical involved with mood and desire for food.

The two thousand three study captured attention among mental health professionals, and popular culture. In fact, Science magazine recognized the discovery of "genes for mental illness" as the number two "Breakthrough of the Year." The winner was observations about mysteries of the universe.

Last week, however, other researchers published findings of a large new study. They report finding no link between the serotonin transporter gene and the risk of depression. The findings appeared in the Journal of the American Medical Association.

Neil Risch is director of the University of California, San Francisco, Institute for Human Genetics and a leader of the new study. He says the earlier study gained so much recognition, it became -- in his words -- "fixed in many people's minds as true."

They found that the risk of depression was not higher among those with the shorter gene. But they also found that stressful events themselves did appear to increase the risk for depression.

Neuroscientist Avshalom Caspi, then at Kings College London, led the two thousand three study. He is now at Duke University in North Carolina. He has criticized the new study as incomplete. He says it ignores evidence that supports the original research.

Peter Zandi is a genetic researcher at John Hopkins University School of Public Health in Maryland. He agrees that this latest study is not the final word.

PETER ZANDI: "After many years of trying to figure out what is going on with the genetic cause of depression, we're still not there yet."