Update Required To play the media you will need to either update your browser to a recent version or update your Flash plugin.
By Caty Weaver
2012-2-14

As sure as honey attracts bees, Valentine's Day attracts scientists with studies about human relations.

For example, in recent days, researchers announced new findings about online dating sites. These are now among the most popular ways for singles to meet. Many sites say they have a special formula to find the perfect partner. But the researchers say these claims are unsupported and likely false. 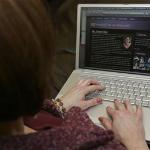 Lead author Eli Finkel at Northwestern University in Illinois said online dating is a great addition to the ways for singles to look for love. But the study found that so far there is no scientific evidence that any formula or "matching algorithm" actually works.

The study is being published in the journal Psychological Science in the Public Interest.

Now here is a different question: When do you suppose a female voice is most unappealing to a man?

Researchers measured men's reactions to women's voices at different points during their monthly cycle. The study found that generally a woman's voice is most unattractive to men during her period.

All the experiments found that men can detect small changes in women's voices at different points in the menstrual cycle.

About two hundred college-age males took part in the study. Ten young women provided voice recordings from four points in their cycles. These included the times of highest and lowest fertility. The highest is during ovulation, when the body releases an egg for fertilization. The lowest is during a woman’s period.

The men had a twenty-five percent chance of guessing which recordings were made during menstruation. But they chose correctly at least thirty-four percent of the time.

Finally, one group of men simply listened to the recordings. They were asked to choose the voice they found most unattractive. Again, thirty-four percent of the time they chose the so-called menstrual voice.

Nathan Pipitone of Adams State College in Colorado led the study, published in the journal Ethology. He points out that in other primates, it is often easy to recognize when females are most fertile. But in humans the effects of hormonal changes are often difficult to recognize.

Dr. Pipitone says evolution may have reduced the effects in humans in order to support relationships with just one partner.

NATHAN PIPITONE: "I think this reflects the shift in the minimization of these cues across the menstrual cycle to lead to one of our most prominent mating strategies -- monogamy. Having drastic shifts in females attitudes and behaviors does not bode well for a pair-bonding relationship."