Mouth X-Rays and the Brain; Infected Gums Do Not Cause Heart Attacks

Update Required To play the media you will need to either update your browser to a recent version or update your Flash plugin.
By VOA
2012-4-24

A new study suggests that dental X-rays may increase the risk of the most common kind of brain tumor. However, experts say the risk of these mostly non-cancerous growths is still very small.

The study involved about fourteen hundred patients with brain tumors called meningiomas. They were compared with a control group without brain tumors. 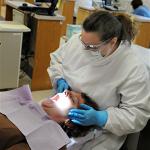 An oral exam in Minnesota
Dr. Elizabeth Claus of Yale University in Connecticut led the study. She says there was a clear relationship between dental X-rays and the brain tumors.

ELIZABETH CLAUS: "We found that the individuals that were diagnosed with meningioma were essentially about twice as likely to report having a specific type of X-ray, which is very common, a bitewing."

The link was greater with a different kind of imaging, called a panoramic X-ray. There was up to five times the risk, depending on age or how often the X-rays were taken.

Dr. Claus points out that in this study, the people were generally in their fifties or older. They were asked to remember X-rays they might have had many years earlier.

ELIZABETH CLAUS: "There is always some difficulty in people remembering past exposures. And so patients could under- or over-report their dental X-rays. And so you always have to keep that in mind."

Dr. Claus says she does not want to scare people away from dental visits.

ELIZABETH CLAUS: "The big take-home message is, keep going to the dentist. But have a conversation with your dentist about whether you might be able to reduce the number of X-rays that you receive."

During dental procedures, and even when people brush their teeth, mouth bacteria often enter the blood system. A popular belief is that gum disease can lead to heart attacks. But last week, Circulation, a journal of the American Heart Association, published a statement saying there is no scientific proof.

A committee of heart doctors, dentists and infectious disease specialists considered five hundred journal articles and studies. They say there is not enough evidence at this time to confirm a cause-and-effect relationship between gum disease and heart disease.

Both diseases are often found in the same patient. But the experts say this is possibly because of risk factors common to both diseases. People who do not pay attention to risk factors like smoking, diabetes or high blood pressure may not pay close attention to their oral health either.