Helen Keller, 1880-1968: She Became the Most Famous Disabled Person in the World

Update Required To play the media you will need to either update your browser to a recent version or update your Flash plugin.
By Katherine Clarke
2011-8-6 Photo: helenkellerbirthplace.org
Ann was a loyal and dedicated teacher to Helen

SHIRLEY GRIFFITH: And I'm Shirley Griffith with People in America - a program in Special English by the Voice of America. Every week we tell about someone who was important in the history of the United States.

This week we finish the story of a writer and educator, Helen Keller. She helped millions of people who, like her, were blind and deaf.

RAY FREEMAN: We reported last week that Helen Keller suffered from a strange sickness when she was only nineteen months old. It made her completely blind and deaf. For the next five years she had no way of successfully communicating with other people.

Then, a teacher -- Anne Sullivan -- arrived from Boston to help her. Miss Sullivan herself had once been blind. She tried to teach Helen to live like other people. She taught her how to use her hands as a way of speaking.

Miss Sullivan took Helen out into the woods to explore nature. They also went to the circus, the theater, and even to factories. Miss Sullivan explained everything in the language she and Helen used -- a language of touch -- of fingers and hands. Helen also learned how to ride a horse, to swim, to row a boat and, even to climb trees. Helen Keller once wrote about these early days.

SHIRLEY GRIFFITH: "One beautiful spring morning I was alone in my room, reading. Suddenly, a wonderful smell in the air made me get up and put out my hands. The spirit of spring seemed to be passing in my room. ‘What is it?' I asked. The next minute I knew it was coming from the mimosa tree outside.

I walked outside to the edge of the garden, toward the tree. There it was, shaking in the warm sunshine. Its long branches, so heavy with flowers, almost touched the ground. I walked through the flowers to the tree itself and then just stood silent. Then I put my foot on the tree and pulled myself up into it. I climbed higher and higher until I reached a little seat. Long ago someone had put it there. I sat for a long time. . . Nothing in all the world was like this."

RAY FREEMAN: Later, Helen learned that nature could be cruel as well as beautiful. Strangely enough she discovered this in a different kind of tree.

SHIRLEY GRIFFITH: "One day my teacher and I were returning from a long walk. It was a fine morning. But it started to get warm and heavy. We stopped to rest two or three times. Our last stop was under a cherry tree a short way from the house.

The shade was nice and the tree was easy to climb. Miss Sullivan climbed with me. It was so cool up in the tree we decided to have lunch there. I promised to sit still until she went to the house for some food. Suddenly a change came over the tree. I knew the sky was black because all the heat, which meant light to me, had died out of the air. A strange odor came up to me from the earth. I knew it -- it was the odor which always comes before a thunderstorm.

I felt alone, cut off from friends, high above the firm earth. I was frightened, and wanted my teacher. I wanted to get down from that tree quickly. But I was no help to myself. There was a moment of terrible silence.

Then a sudden and violent wind began to shake the tree and its leaves kept coming down all around me. I almost fell. I wanted to jump, but was afraid to do so. I tried to make myself small in the tree, as the branches rubbed against me. Just as I thought that both the tree and I were going to fall, a hand touched me. . . It was my teacher. I held her with all my strength then shook with joy to feel the solid earth under my feet. "

RAY FREEMAN: Miss Sullivan stayed with Helen for many years. She taught Helen how to read, how to write and how to speak. She helped her to get ready for school and college. More than anything, Helen wanted to do what others did, and do it just as well. 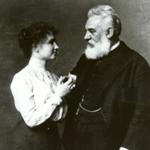 In time, Helen did go to college and completed her studies with high honors. But it was a hard struggle. Few of the books she needed were written in the Braille language that the blind could read by touching pages. Miss Sullivan and others had to teach her what was in these books by forming words in her hands.

The study of geometry and physics was especially difficult. Helen could only learn about squares, triangles, and other geometrical forms by making them with wires. She kept feeling the different shapes of these wires until she could see them in her mind.

During her second year at college, Miss Keller wrote the story of her life and what college meant to her. This is what she wrote.

SHIRLEY GRIFFITH: "My first day at Radcliffe College was of great interest. Some powerful force inside me made me test my mind. I wanted to learn if it was as good as that of others.

I learned many things at college. One thing, I slowly learned was that knowledge does not just mean power, as some people say. Knowledge leads to happiness, because to have it is to know what is true and real.

To know what great men of the past have thought, said and done is to feel the heartbeat of humanity down through the ages."

RAY FREEMAN: All of Helen Keller's knowledge reached her mind through her sense of touch and smell, and of course her feelings.

To know a flower was to touch it, feel it, and smell it. This sense of touch became greatly developed as she got older.

She once said that hands speak almost as loudly as words.

She said the touch of some hands frightened her. The people seem so empty of joy that when she touched their cold fingers it is as if she were shaking hands with a storm.

She found the hands of others full of sunshine and warmth.

Strangely enough, Helen Keller learned to love things she could not hear, music for example. She did this through her sense of touch.

When waves of air beat against her, she felt them. Sometimes she put her hand to a singer's throat. She often stood for hours with her hands on a piano while it was played. Once, she listened to an organ. Its powerful sounds made her move her body in rhythm with the music.

She also liked to go to museums. She thought she understood sculpture as well as others. Her fingers told her the true size, and the feel of the material. 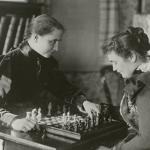 What did Helen Keller think of herself? What did she think about the tragic loss of her sight and hearing? This is what she wrote as a young girl:

SHIRLEY GRIFFITH: "Sometimes a sense of loneliness covers me like a cold mist -- I sit alone and wait at life's shut door. Beyond, there is light and music and sweet friendship, but I may not enter. Silence sits heavy upon my soul.

Then comes hope with a sweet smile and says softly, 'There is joy in forgetting one's self.' And so I try to make the light in others' eyes my sun. . . The music in others' ears my symphony. . . The smile on others' lips my happiness."

RAY FREEMAN: Helen Keller was tall and strong. When she spoke, her face looked very alive. It helped give meaning to her words. She often felt the faces of close friends when she was talking to them to discover their feelings. She and Miss Sullivan both were known for their sense of humor. They enjoyed jokes and laughing at funny things that happened to themselves or others.

Helen Keller had to work hard to support herself after she finished college. She spoke to many groups around the country. She wrote several books. And she made one movie based on her life. Her main goal was to increase public interest in the difficulties of people with physical problems.

The work Helen Keller and Anne Sullivan did has been written and talked about for many years. Their success showed how people can conquer great difficulties.

Anne Sullivan died in nineteen thirty-six, blind herself. Before Miss Sullivan died, Helen wrote and said many kind things about her.

SHIRLEY GRIFFITH: "It was the genius of my teacher, her sympathy, her love which made my first years of education so beautiful.

My teacher is so near to me that I do not think of myself as apart from her. All the best of me belongs to her. Everything I am today was awakened by her loving touch."

SHIRLEY GRIFFITH: You have just heard the last part of the story of Helen Keller. Our Special English program was written by Katherine Clarke and produced by Lawan Davis. I'm Shirley Griffith.

RAY FREEMAN: And I'm Ray Freeman. Listen again next week to another People in America program on the Voice of America.