Update Required To play the media you will need to either update your browser to a recent version or update your Flash plugin.
By Richard Thorman
2012-1-14 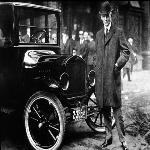 Photo: AP
Henry Ford with a Model T in Buffalo, New York, in 1921. About one million Model Ts were produced that year. The car was introduced on October 1, 1908.

PEOPLE IN AMERICA, a program in Special English on the Voice of America.

Every week at this time, we tell the story of a person important in the history of the United States. Today, Steve Ember and Frank Oliver complete the story of industrialist Henry Ford.

STEVE EMBER: In nineteen three, a doctor in Detroit, Michigan, bought the first car from the Ford Motor Company. That sale was the beginning of Henry Ford's dream. He wanted to build good, low-priced cars for the general public. As he said many times: "I want to make a car that anybody can buy."

To keep prices low, Henry Ford decided that he would build just one kind of car. He called it the Model T.

FRANK OLIVER: The Model T was ready for sale in October nineteen eight.

The Model T cost eight hundred fifty dollars. It was a simple machine that drivers could depend on. Doctors bought the Model T. So did farmers. Even criminals. They considered it the fastest and surest form of transportation.

Americans loved the Model T. They wrote stories and songs about it. Thousands of Model Ts were built in the first few years. The public wanted the car. And Henry Ford made more and more.

STEVE EMBER: To Make the Model T, Ford built the largest factory of its time. Inside the factory, car parts moved to the workers exactly when they needed them. Other factories moved some parts to the workers. But Ford was the first to design his factory completely around this system. Production rose sharply.

The last step in Ford's production success was to raise his workers' pay. His workers had always earned about two dollars for ten hours of work. That was the same daily rate as at other factories.

FRANK OLIVER: That made Henry Ford popular with working men. He became popular with car buyers in nineteen thirteen when he gave back fifty dollars to each person who had bought a Ford car. Henry Ford was demonstrating his idea that if workers received good wages, they became better buyers. And if manufacturers sold more products, they could lower prices and still earn money.

This system worked for Ford because people continued to demand his Model T. And they had the money to buy it. But what would happen when people no longer wanted the Model T, or did not have the money?

STEVE EMBER: In nineteen nineteen, Henry was involved in a dispute with the other people who owned stock in the Ford Motor Company. In the end, Henry bought the stock of the other investors. He gained complete control of the company.

The investors did not do badly, however. An investment of ten thousand dollars when the company was first established produced a return of twenty-five million dollars.

A few years later, another group of investors offered Ford one thousand million dollars for the company. But he was not interested in selling. He wanted complete control of the company that had his name. In a sense, Henry Ford was the company.

FRANK OLIVER: Henry's son, Edsel, was named president of the company before nineteen twenty. No one truly believed that Edsel was running the company. Whatever Edsel said, people believed he was speaking for his father.

STEVE EMBER: The success of the Ford Motor Company permitted Henry Ford to work on other projects.

He became a newspaper publisher. He bought a railway. He built airplanes. He helped build a hospital. He even ran for the United States Senate. 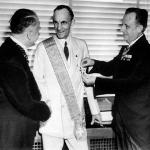 Some of Henry's projects were almost unbelievable. For example, he tried to end World War One by sailing to Europe with a group of peace supporters.

FRANK OLIVER: While Henry Ford enjoyed his success, a dangerous situation was developing. Other companies began to sell what only Ford had been selling: good, low-priced cars. Ford's biggest competitor was the General Motors Company. General Motors produced the Chevrolet automobile.

Ford's Model T was still a dependable car. But it had not changed in years. People said the Model T engine was too loud. They said it was too slow. The Chevrolet, however, had a different look every year. And you could pay for one over a long period of time.

Ford demanded full payment at the time of sale. Ford's share of the car market began to fall.

STEVE EMBER: Everyone at Ford agreed that the Model T must go. Henry Ford disagreed. And it was his decision that mattered. Finally, in nineteen twenty-six, even Henry admitted that the age of the Model T was over. A new Ford was needed.

A year later, the Model T was gone.

Strangely enough, people mourned its end. They did not want to buy it anymore. But they recognized that the Model T was the last of the first cars in the brave new world of automobile development.

The success of Ford's new cars did not last long. After nineteen thirty, Ford would always be second to General Motors.

FRANK OLIVER: In nineteen twenty-nine, the United States suffered a great economic recession. Many businesses failed. Millions of people lost their jobs. In nineteen thirty-one, the Ford Motor Company sold only half as many cars as it had the year before. It lost thirty-seven million dollars. Working conditions at Ford grew worse.

In nineteen thirty-two, hungry, unemployed men marched near the Ford factory. Police, firefighters and Ford security guards tried to stop them with sticks, high-pressure water and guns. Four of the marchers died, and twenty were wounded.

Newspapers all over the United States condemned the police, firefighters and security guards for attacking unarmed men. And to make a bad situation worse, Ford dismissed all workers who attended funeral services for the dead.

STEVE EMBER: More violence was to come. For several years, automobile workers had been attempting to form a labor union. Union leaders negotiated first with America's two other major automobile makers: the Chrysler company and General Motors. Those companies quickly agreed to permit a union in their factories. That left Ford alone to fight against the union. And fight he did.

FRANK OLIVER: In nineteen thirty-seven, union organizers were passing out pamphlets to workers at the Ford factory. Company security guards struck. They were led by the chief of security, Harry Bennett.

Harry Bennett knew nothing about cars. But he did know what Henry Ford wanted done. And he did it. Bennett's power came from Henry. The only person who might have had the power to stop Bennett was Henry's son, Edsel, who was president of the company. But Edsel himself was fighting Henry and his unwillingness to change.

Bennett's power in the company continued to grow. His violence against the union of automobile workers also grew.

The Ford Motor Company did not agree to negotiate with the union until nineteen forty-one. Henry Ford accepted an agreement. If he had not, his company would have lost millions of dollars in government business.

STEVE EMBER: In nineteen forty-three, Edsel Ford died. With Edsel gone, Henry again became president of the Ford Motor Company. It was difficult to know if Henry or Harry Bennett was running the company. America was at war. And Henry was eighty years old -- too old to deal with the problems of wartime production. And Bennett knew nothing at all about production.

So Henry's grandson, also Henry Ford, was recalled from the Navy to run the company. Young Henry's first act was to dismiss Harry Bennett.

FRANK OLIVER: Old Henry Ford retired from business. His thoughts were in the past. He died in his sleep in nineteen forty-seven, at the age of eighty-three.

Henry Ford was not the first man whose name was given to an automobile. But his name -- more than any other -- was linked to that machine. And his dream changed the lives of millions of people.

Some still wonder if Henry Ford was a simple man who seemed difficult -- or a difficult man who seemed simple. No one, however, questions the fact that he made the automobile industry one of the great industries in the world.

FRANK OLIVER: You have been listening to the Special English program PEOPLE IN AMERICA. Your narrators were Steve Ember and Frank Oliver. Our program was written by Richard Thorman. I'm Ray Freeman.