What You Can Do to Reduce the Risk of Getting Hepatitis

Update Required To play the media you will need to either update your browser to a recent version or update your Flash plugin.
By Brianna Blake
2010-11-15 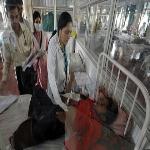 Photo: AP
A doctor attends to a hepatitis patient in a special isolation area at a hospital in Ahmadabad, India

STEVE EMBER: This is SCIENCE IN THE NEWS in VOA Special English. I'm Steve Ember.

BARBARA KLEIN: And I'm Barbara Klein. This week, we will tell about six diseases of the liver. The diseases come from six different viruses. Doctors have one name for all of them: hepatitis.

STEVE EMBER: The liver is in the upper right part of the stomach. This dark, red organ is big. It weighs more than one kilogram. And, it has a big job. The liver helps clean the blood and fight infection. It also helps break down food and store energy until the body needs it.

Hepatitis destroys liver cells. Some kinds of hepatitis are much more serious than others. Which kind a person has can only be known from tests for antibodies in the blood.

Antibodies are special proteins that the body's natural defenses against disease produce in answer to a threat. Identify the antibody and you identify the threat.

BARBARA KLEIN: Hepatitis A is usually spread through human waste in water or food. It is in the same group of viruses as those that cause the disease polio.

The hepatitis A virus causes high body temperature, pain and weakness. It causes problems with the stomach and intestines, making it difficult to eat or break down food. Also, the skin of a person with hepatitis may become yellow. This is a sign that the liver is not operating normally.

STEVE EMBER: Hepatitis A can spread quickly to hundreds or thousands of people. But the virus is deadly in less than one percent of cases. Many people infected with the virus never even get sick. But those who do usually recover within two months.

The World Health Organization says hepatitis A is often found in Africa, Asia and Central and South America. People who have had hepatitis A cannot get it again. There is a vaccine to prevent hepatitis A. America's Centers for Disease Control and Prevention says the vaccine is the best way to protect against the disease.

BARBARA KLEIN: The World Health Organization says as many as two billion people are infected with the hepatitis B virus. More than three hundred fifty million of those infected have lifelong infections. WHO officials say an estimated six hundred thousand people die each year as a result of hepatitis B.

The virus is in the same group as the herpes and smallpox viruses. Hepatitis B vaccines have been given since the nineteen eighties. The W-H-O says the vaccine is ninety-five percent effective in preventing the development of infection.

A boy in Lima, Peru, reacts to a hepatitis B vaccine

STEVE EMBER: Hepatitis B spreads when blood from an infected person enters the body of another person. An infected mother can infect her baby. The virus can also spread through sexual activity, and if people share injection devices.

Blood products from an infected person can spread hepatitis B. People also can get infected if they share personal-care products that might have blood on them. Some examples are toothbrushes and sharp hair-cutting instruments.

BARBARA KLEIN: Worldwide, most hepatitis B infections are found in children. Young children are the ones most likely to develop a chronic or lifelong infection. The risk of such an infection is small for children older than four years.

About ninety percent of babies infected with hepatitis B during the first year develop chronic infections. Such persons are at high risk of death from liver disease or liver cancer. The hepatitis B vaccine is considered to be the first medicine that can protect people against liver cancer.

STEVE EMBER: Hepatitis C is even more dangerous. Like hepatitis B, it spreads when blood from an infected person enters someone who is not infected.

The hepatitis C virus belongs to the same group of viruses as yellow fever and West Nile virus. Most people living with hepatitis C develop chronic infections, often without any signs. They are at high risk for liver disease and liver cancer.

The World Health Organization says about one hundred seventy million people are infected with hepatitis C. That is three percent of the population of the world! The WHO. also says that as many as four million more become infected each year. It warns that those infected may develop diseases of the liver, including liver cancer. The WHO says the highest rates of infection are in Africa, Asia, and Central and South America.

BARBARA KLEIN: The hepatitis C virus was first observed in nineteen seventy-four. But it was not officially recognized as a new kind of hepatitis until nineteen eighty-nine. Scientists have been working to develop a vaccine and other treatments.

Last month, the journal Lancet reported that a combination of two experimental drugs could clear the infection in eight to twelve weeks. However, researchers are still studying the effects of the treatment.

The Centers for Disease Control and Prevention says about three million Americans are infected with hepatitis C. The rates are highest among people born between nineteen forty-five and nineteen sixty-five. Those especially at risk include persons who inject themselves with drugs and those who received blood or blood products before nineteen ninety.

STEVE EMBER: Hepatitis D is spread through blood, but only infects people who already have hepatitis B. The hepatitis D virus greatly increases the chance of severe liver damage. Experts say the virus infects about fifteen million people around the world. They say it also appears in five percent of persons infected with hepatitis B.

Doctors say the best way to prevent hepatitis D is to get vaccine that protects against hepatitis B. Doctors can treat some cases of hepatitis B, C and D. The drugs used are costly, however. But they are less costly than getting a new liver.

Hepatitis E is also found in animal waste. Studies have shown that the virus can infect many kinds of animals.

STEVE EMBER: The WHO says many hepatitis E cases have been reported in Central and Southeast Asia, North and West Africa and Mexico. No vaccines or medicines are effective against hepatitis E. Most people recover, usually in several weeks or months. But the disease can cause liver damage. In some cases, hepatitis E can be deadly.

The virus is especially dangerous to pregnant women. Twenty percent of those living with hepatitis E die in the last three months of pregnancy.

BARBARA KLEIN: Scientists discovered yet another kind of hepatitis in the nineteen nineties. It has been named hepatitis G. The hepatitis G virus is totally different from any of the other hepatitis viruses.

Donald Poretz is an infectious disease specialist in Washington, DC. He says the hepatitis G virus is spread through blood and blood products. But he says the virus has not been found to cause any real disease.

STEVE EMBER: The World Hepatitis Alliance works to increase knowledge about the dangers of hepatitis. The group says people should know that the disease kills about one million five hundred thousand people each year. It also says one in twelve people worldwide is living with hepatitis B or hepatitis C. And, it says, most of those infected do not even know it.

Hepatitis cannot be cured. The only way to protect against infection is to receive vaccines against hepatitis A and B, and to avoid contact with the other viruses. And that may be difficult.

Remember that some kinds of hepatitis spread through sex or sharing needles. Blood products should be carefully tested for hepatitis. People in high-risk groups and those who have had hepatitis should not give blood. They also should not agree to leave their organs to others after they die. Donated organs can also spread hepatitis.

BARBARA KLEIN: Experts say people can take other steps to protect themselves. These include always washing your hands with soap and water after using the restroom and before preparing or eating food.

Experts say travelers should not drink water of unknown quality when visiting foreign or unknown areas. They also should avoid eating uncooked fruits and vegetables.

STEVE EMBER: This SCIENCE IN THE NEWS was written by Brianna Blake. George Grow was our producer. I'm Steve Ember.

BARBARA KLEIN: And I'm Barbara Klein. Listen again next week for more news about science in Special English on the Voice of America.