Update Required To play the media you will need to either update your browser to a recent version or update your Flash plugin.
By Paul Thompson
2012-3-6 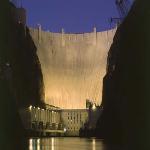 BOB DOUGHTY: This is Bob Doughty.

STEVE EMBER: And this is Steve Ember with EXPLORATIONS in VOA Special English. Today we tell about Hoover Dam.

The snow is so deep in some areas that it will stay on the ground well into the hot days of summer. But the snow does melt. Ice cold water travels down the mountains and forms several rivers -- the Gila River, the Green River, the Little Colorado, the San Juan, the Virgin and the Gunnison Rivers. These rivers link together and form the beginnings of the Colorado River. The Colorado River flows through, or provides water for, the states of Wyoming, Colorado, Utah, New Mexico, Arizona, Nevada and California. Then it crosses the border into Mexico.

STEVE EMBER: The Colorado River has always been extremely powerful. The river created the huge Grand Canyon. The violent water cut hundreds of meters deep into the desert floor of Arizona.? The Grand Canyon is proof of the power of this great river.

The Grand Canyon was cut into the desert floor beginning thousands of years ago.? But the power of this river has been demonstrated in more modern times.

Between nineteen-oh-five and nineteen-oh-seven, the Colorado River caused great amounts of flooding in parts of Arizona and California. Huge amounts of water ran into a low area in the dry, waterless desert that had once been an ancient lake. In two years of flooding, the Colorado River filled the ancient lake. That lake is called the Salton Sea. Today, it is about fifty-six kilometers long by twenty-five kilometers wide. It is even larger in years of heavy rain.

BOB DOUGHTY: The flooding that created the Salton Sea also flooded homes, towns and farming areas. Many people were forced to flee their homes. Government leaders knew they had to do something to prevent such floods in the future.

In nineteen eighteen, a man named Arthur Davis proposed building a dam to control the Colorado River. Mister Davis was a government engineer. He said the dam should be built in an area called Boulder Canyon on the border between the states of Arizona and Nevada.

On November twenty-fourth, nineteen twenty-two, officials signed a document in Santa Fe, New Mexico. That document is called the Colorado River Compact. The document tells how the seven states would share the water of the Colorado River. It was agreed this could be more easily done with the aid of a dam. Later an agreement was signed with Mexico to supply it with water from the Colorado River.

BOB DOUGHTY: The area chosen for the dam was called Black Canyon. The walls of Black Canyon rise almost two hundred forty-three meters above the river. An ancient volcano formed the rock in Black Canyon. Engineers decided the rock would provide a good strong support for the proposed dam.

However, the area also presented problems. The nearest railroad was sixty kilometers away. There was no electric power. And, in the summer, the temperature in the desert in Black Canyon could reach as high as forty-eight degrees Celsius. 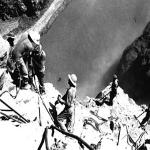 Workers drill into the canyon wall above the Colorado River

STEVE EMBER: The work on the dam began in April of nineteen thirty-one. Workers called "high scalers" were some of the first to begin building the dam. They were suspended from ropes as they used heavy air-powered hammers to break any loose rock away from the face of the canyon walls. When they could not use hammers, they used dynamite. One high scaler became very famous. His name was Arnold Parks. He caught another worker who had fallen off the top of the canyon.

Mister Parks held the worker to the wall of the canyon until others came to help. Today, visitors can see a statue of the men who worked as high scalers to build Hoover Dam.

Huge equipment moved millions of tons of rock and sand. In the summer months, the terrible desert heat slowed the work but did not stop it. Men who worked at night on the dam suffered less, but the heat was still as high as thirty degrees Celsius.

BOB DOUGHTY: Slowly the great dam began to rise from the floor of the canyon. From the canyon floor it reaches two hundred twenty-one meters high. Workers poured the last of the concrete on May twenty-ninth, nineteen thirty-five.? They had used almost four million cubic meters of concrete in the dam. Workers also used more than twenty million kilograms of steel to strengthen the concrete in the dam.

STEVE EMBER: The work was dangerous for the more than five thousand men who worked on the structure. The extreme temperatures, falling objects and heavy equipment caused accidents. The workers were provided with medical care and two emergency vehicles to take them to a new hospital in Boulder City. However, ninety-six men lost their lives during the building of the great dam.

The companies building the dam had been given seven years to complete the work. They did it in only five. The dam was finished on March first, nineteen thirty-six.

Other work now began. This work would make the dam into one of the largest producers of electric power ever built. The dam was built to control the powerful Colorado River. But it was also meant to use the river to produce large amounts of electric power.

Today, seventeen huge machines use the river's power to produce electric power. The states of Arizona and Nevada share the power. So do many cities in California, including Los Angeles, Burbank, and Pasadena.

BOB DOUGHTY: When the Hoover Dam was finished in nineteen thirty-six, it was the largest dam in the world. It was also the tallest. And it was the largest power producer that used water power to make electricity. Today this is no longer true. Taller dams, larger dams and a few that produce more power have been created. But Hoover Dam is still a huge and interesting place.

Visitors to Hoover Dam drive on a small road that passes Lake Mead. They enter a special visitors' center to learn about the dam and the men who built it. They ride high-speed elevators that go deep inside the dam. They see the huge machines that produce electric power.

Many visitors say they thought the name of the huge structure was Boulder Dam.? They are told that Hoover Dam is often called Boulder Dam. However, it is named after former President Herbert Hoover. 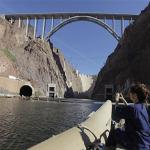 The Mike O'Callaghan-Pat Tillman Memorial Bridge was completed in 2010. Hoover Dam is in the background.

Before he was president, Mister Hoover worked for many years to make the construction of the dam possible. It was officially named to honor him in nineteen forty-seven.

Visitors leave the great dam with an understanding of how difficult the project was. They learn that it still safely controls the great Colorado River. And it also provides water and electric power to millions of people in the American southwest.

STEVE EMBER: This program was written by Paul Thompson. It was produced by Mario Ritter. This is Steve Ember.

BOB DOUGHTY: And this is Bob Doughty. Join us again next week for another EXPLORATIONS program in VOA Special English.