How Will UN Court Ruling on Kosovo Affect Other Separatist Movements?

Update Required To play the media you will need to either update your browser to a recent version or update your Flash plugin.
By VOA
2010-7-23 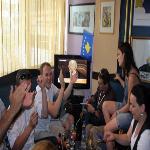 Photo: AP
Kosovars celebrate the finding by the United Nations' highest court that their declaration of independence from Serbia did not break international law

In February of two thousand eight, Kosovo declared its independence from Serbia. Now the top United Nations court says Kosovo's declaration was legal. Hisashi Owada, president of the International Court of Justice in The Hague, read the opinion.

Serbia had asked the court for its opinion. Now Serbia is sending diplomats to fifty-five countries. Their job: try to block efforts by Kosovo to gain further recognition.

VUK JEREMIC: "Serbia will never under any circumstances recognize the unilateral declaration of independence of the so-called Republic of Kosovo."

Ian Bancroft is the co-founder of TransConflict, a humanitarian organization working in the western Balkans. Speaking from Belgrade, he said the ruling sends a message about international law. IAN BANCROFT: "Therefore, any secessionist movement, no matter where it is in the world, will look towards this and gain some encouragement that they too can pursue this path."

But Kurt Volker, former American ambassador to NATO, the North Atlantic Treaty Organization, is not so sure what will happen.

KURT VOLKER: "I don't think this is going to have that big an effect on either side, whether it's the states who want to maintain their territorial integrity against the aspirations of some of their own indigenous people or, for that matter, movements that want to seek their own independence and freedom."

Mr. Volker says "those desires are already going on," and will continue independent of the decision.

The judges on the International Court of Justice, sometimes called the World Court, voted ten to four. The ruling is non-binding; it does not have legal force.

Sixty-nine countries have already recognized Kosovo. These include the United States, Japan and most of the European Union.

Serbia's main ally Russia has recognized the self-declared independence of South Ossetia and Abkhazia in Georgia. But Russia does not recognize Kosovo. Nor does another permanent member of the United Nations Security Council, China.

In Washington, the State Department welcomed the ruling. It urged Europe to "unite behind a common future." But spokesman P.J. Crowley said it is too soon to discuss withdrawing the NATO-led international security force in Kosovo.

Kosovo was a Serbian province that became a United Nations protectorate in nineteen ninety-nine. That followed seventy-eight days of NATO bombing against Serbia. The campaign ended a two-year war between Serbia and the ethnic Albanian majority in Kosovo.

The advisory opinion from the court will go to the United Nations General Assembly. A debate on Kosovo is expected in September.

On Friday, in a separate development, police in Kosovo arrested the head of the country's central bank. The arrest was part of a continuing series of corruption investigations of officials.

And that's IN THE NEWS in VOA Special English. What effect do you think the Kosovo ruling will have around the world? You can comment at 51voa.com or on Facebook and Twitter at VOA Learning English. I'm Steve Ember.