How a Promise to Guarantee Bad Debts Came to Haunt Ireland

Update Required To play the media you will need to either update your browser to a recent version or update your Flash plugin.
By Mario Ritter
2010-11-25 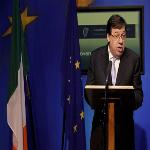 BRIAN COWEN: "Today we've come to announce a four-year plan, between now and 2014. It's to bring certainty for our people. It's to ensure they have hope for the future."

The plan aims to cut spending and raise taxes by twenty billion dollars. These austerity measures are a step toward getting aid from the European Union and the International Monetary Fund.

But Mr. Cowen's government could fall before next year's budget is passed.

The government asked for help Sunday after weeks of saying it did not need any. The EU and the IMF are expected to provide about one hundred fifteen billion dollars -- or about half of Ireland's economy.

Ireland got into trouble by guaranteeing the debts of its banks during the world financial crisis two years ago. That promise has now cost over sixty billion dollars.

Roisin O'Sullivan is an economics professor at Smith College in Massachusetts and a former economist at the Central Bank of Ireland.

ROISIN O'SULLIVAN: "What was different about the Irish approach was that all deposits were guaranteed and bondholders, investors that had bought bonds in these banks, also received the government guarantee. This was a more extensive bailout than most countries pursued."

Professor O'Sullivan says Irish bankers and banking supervisors had too close of a relationship.

Ireland was known as the "Celtic Tiger" in the nineteen nineties. Its educated, English-speaking workers and low taxes appealed to foreign companies. Its economy grew quickly.

But foreign investment and low interest rates inflated a property bubble, raising prices to levels that could not be supported. Bad property loans hit hard at Ireland's main banks. Unemployment is over thirteen percent.

Ireland's bank bailout and government spending have expanded this year's deficit to more than thirty percent of gross domestic product. This is ten times the EU limit for a deficit in relation to the size of an economy, as measured by GDP.

But John James at Pace University in New York state says there is little the European Union can do. Germany and France want to give the European Commission more power over national budgets. For now, rescues by the European Central Bank and other lenders are the only answer in a debt crisis.

EU officials want to complete the Irish aid plan quickly. They want to be ready in case of more bad news from economies like Greece, Portugal and Spain.