Update Required To play the media you will need to either update your browser to a recent version or update your Flash plugin.
By VOA
2010-6-9 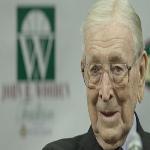 John Wooden died last Friday at the age of ninety-nine. He was one of the greatest twentieth-century Americans in sports. He was an excellent college basketball player. He led Purdue University to a national championship in nineteen thirty-two. After college he was a high school coach. He also taught English for nine years.

But where he really made his mark was at the University of California, Los Angeles. He was head coach of men's basketball for twenty-seven years.

His teams won a record ten national championships. These included seven in a row during the late nineteen sixties and early seventies. The Bruins have won just one other championship since then.

An announcer described him in nineteen seventy-five after his final championship victory, which was also his final game.

ANNOUNCER: "As Wooden enters the playing court, he receives a standing ovation from an overflow crowd and true to the Wooden tradition, on the outside everything appears calm."

He coached famous players like Kareem Abdul-Jabbar, known then as Lew Alcindor, and Bill Walton.

Several years ago, Kareem Abdul-Jabbar spoke at a ceremony honoring John Wooden. He said many top athletes worry they will be exploited for their skills by their coach.

KAREEM ABDUL-JABBAR: "That never, ever had a possibility of happening in my experience at U.C.L.A. because of this man here. He really wanted myself and all of us who participated in the program to get our degrees and learn what it meant to be a good citizen, and to be good parents and husbands and responsible human beings. And that was the most important thing for him."

John Wooden was praised for how he taught the basics of the game, like passing, defense and moving without the ball. But he also offered life lessons as a speaker and author. His books included the self-improvement guide "Pyramid of Success."

At a speaking event when he was already in his nineties, he explained that his father had taught him a few things about success.

JOHN WOODEN: "I was raised on a small farm in southern Indiana and Dad tried to teach me and my brothers that you should never try to be better than someone else. Always learn from others and never cease trying to be the best you could be. That's under your control."

Those words later helped him with his own definition of success.

His wife of fifty-three years, Nell, died in nineteen eighty-five.

At U.C.L.A. the man known simply as "Coach" had a record of six hundred twenty wins and one hundred forty-seven losses. Current coach Ben Howland calls John Wooden "the greatest coach in the history of basketball."

And that's the VOA Special English Education Report, with reporting by Nico Colombant and Jim Stevenson. You can read and listen to our reports at 51voa.com. I'm Jim Tedder.