In US, an Epidemic of Prescription Drug Abuse

Update Required To play the media you will need to either update your browser to a recent version or update your Flash plugin.
By VOA
2012-1-3 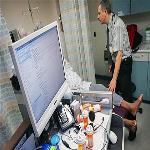 Photo: AP
Dr. Jacob Khushigian checks on a patient who had overdosed - also showing his computer data base that lets doctors know what drugs their patients already are taking - shown in a Kaweah Delta Emergency Room in Visalia, California, February 2010.

Officials in the United States say deadly abuse of painkillers and other prescription drugs has reached epidemic levels. More than thirty-six thousand people died from drug overdoses in two thousand eight, the latest year available. That was almost as many as from road crashes.

More than half of the overdoses involved drugs that need a doctor's approval. And three-fourths of those deaths involved what are called opioid pain relievers. These include drugs like methadone; morphine; hydrocodone, also known as Vicodin; and oxycodone, or OxyContin.

A recent government report said painkiller deaths more than tripled in the past decade. They now top the number of heroin and cocaine deaths combined. The Obama administration released a plan last year to try to deal with the problem.

Some abusers seek help at places like the Malibu Beach Recovery Center near Los Angeles. They learn yoga and other ways to deal with anxiety, stress and pain. Yoga teacher Shannon Scott herself formerly abused Vicodin and the anti-anxiety pill Xanax.

SHANNON SCOTT: "Vicodin was a stimulant for me. So I also used Vicodin as something to, you know, get my engine going and carry me through the day. And then my Xanax would, you know, balance me out and bring me down and relax me."

Joan Borsten heads the center. She says stopping is difficult because the drugs change the body's chemistry.

Around the country, special drug courts work with addicts to get them counseling and treatment. Mary Ann Gunn is a retired drug-court judge. She now appears on "Last Shot With Judge Gunn," a television program that shows the effect of drugs on users and their families.

MARY ANN GUNN: "For instance, in nineteen ninety-nine, the big problem was methamphetamine. And it was a cancer, if you will, throughout our country. And we have addressed that and are continuing to address it. And more and more over the years we began to see people being addicted to prescription drugs."

James Adams is a pharmacologist at the University of Southern California in Los Angeles. He says millions of people live with pain, much of it from arthritis caused by obesity and aging.

JAMES ADAMS: "And it's a real tough problem for a doctor because here you've got a patient with chronic pain, and these patients know exactly how to get what they want. And if that doctor doesn't give it to them, they just go to the next doctor."

He says many patients may be able to manage their pain if they lose weight and get exercise and physical therapy. Another solution: California and many other states have registries. These tell doctors and pharmacists what potentially dangerous drugs their patients are already taking.