Policies, Politics and Dollars Rest on US Census

Update Required To play the media you will need to either update your browser to a recent version or update your Flash plugin.
By Brianna Blake
2010-3-19 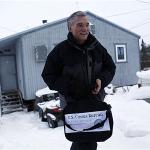 Census forms have been mailed across America. Every ten years since seventeen ninety the Constitution has required a population count.

The results decide how many seats each state will have in the House of Representatives. The numbers will also decide how more than four hundred billion dollars a year in federal assistance is divided.

States that are hurting financially depend on the federal government for about twenty percent of their money. The more people counted, the more money the states can receive.

The Census Bureau says the ten-question form this year is one of the shortest ever and should take no more than ten minutes. Officials want all forms returned by Census Day, April first.

The form asks for the number of people living or staying in a house, apartment or mobile home. It asks for the name of each person living there, and about the ownership of the home. There are also race and ethnicity questions. And a phone number is requested, the form explains, in case an answer is not understood.

The records are made public after seventy-two years. But until then, federal law bars the Census Bureau from sharing individual records with any other agency -- such as immigration or anti-terrorism officials.

Leaders of minority groups including Hispanics and Muslims are urging their communities to complete the form so they are counted. But some people say they do not trust the government and will not answer all the questions.

People are required by law to answer all questions to the best of their ability. There is a five hundred dollar fine for giving false answers. There is a fine of up to five thousand dollars for not returning a census form, but the fine is rarely enforced.

Officials say about seventy percent of the population took part in the last census. This year they hope for higher rates. Still, they expect more than forty-seven million households not to return their forms. This will require a visit by a census worker.

This year's mailing includes, for the first time, bilingual forms in English and Spanish. The Census Bureau chose thirteen million households in areas with large numbers of Spanish speakers. In addition, forms will be available in fifty-nine languages including Chinese, Korean and Russian.

Within around thirty years the Census Bureau expects racial and ethnic minorities to form the majority of America's population. But more than half of all children will be minorities in less than half that time. Minority children, especially Hispanics, are increasing at a fast rate while the United States has fewer white children. Experts predict that the share of babies born to white, non-Hispanic women will fall below fifty percent within the next two years.

And that's IN THE NEWS in VOA Special English, written by Brianna Blake. For more news, go to 51voa.com. I'm Steve Ember.