Update Required To play the media you will need to either update your browser to a recent version or update your Flash plugin.
By Brianna Blake
2010-3-26 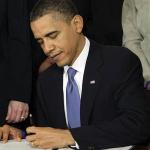 Earlier this week, President Obama won a major political victory with congressional passage of his health care reform plan. He and congressional Democrats made history with the reform legislation. Among other things, it will extend health insurance coverage to thirty-two million Americans now without it.

Mister Obama had made health care his top goal after his election in two thousand eight. The president and his Democratic allies in Congress finally won the battle after more than a year.

BARACK OBAMA: "We did not avoid our responsibility, we embraced it. We did not fear our future, we shaped it."

How big a win this was for President Obama? Many political experts see passage of the health care reform bill as historic. Ross Baker is at Rutgers University in New Jersey.

ROSS BAKER:" This is something, after all, that first came to the attention of the American public one hundred years ago when a national health insurance program was proposed by President Theodore Roosevelt, and successive presidents, mostly Democrats but not all, have favored it."

Stephen Hess is a Presidential Scholar at the Brookings Institution in Washington.

STEPHEN HESS:"It's a big deal. How big a deal you have to measure piece by piece but clearly it is the first major change in our health care system since nineteen sixty-five so that's a long time coming."

STEPHEN HESS:"This is a very great victory for President Obama. This was his first year in office and in many ways he really staked his whole four-year presidency on the success in this vote on healthcare."

However, the new law is also considered a political risk. Most Democrats in Congress supported the measure. But all the Republicans opposed it. Opinion studies in recent days show the public is generally divided on the new law. A USA Today-Gallup poll shows a small majority believe the new health care plan is a good thing.

The health care debate also fueled the rise of the so-called Tea Party movement. The loosely organized group of activists opposed the health care plan as too much government involvement in the economy.

Congressional Democrats have been the targets of threats and destructive acts following the health care vote. House Majority Leader Steny Hoyer says at least ten members of Congress have received threats to themselves or their family members in recent days.

Republicans have promised to make the health care reform law a major issue in mid-term Congressional elections in November. Their goal is to defeat Democrats who supported the measure and then repeal, or cancel, the law. Republican Senator John McCain spoke to ABC News.

JOHN MCCAIN: "The American people are very angry. And they do not like it and we are going to try to repeal this, and we are going to have a very spirited campaign coming up between now and November and there will be a very heavy price to pay for it."

In addition, officials in more than ten states plan to fight the health care law in court. They say the law violates the United States Constitution.

And that's IN THE NEWS in VOA Special English, written by Brianna Blake. You can read, listen and comment on our reports on our Web site, 51voa.com. I'm Steve Ember.